So who are these people anyway? We’re a couple of desk jockeys in our forties that have decided to take the leap, re-prioritize everything and do some long-term travelling. There’s many ramifications to that last sentence. How do you go from owning everything you’ve accumulated over a lifetime and having good careers to pulling up and travelling around the world? Well, we don’t completely know yet but we are doing our best to pull it off. 😃

Helen was born in Northern Ireland and moved to Canada in 1973 when she was 4 due to “the troubles” going on then. She came with her parent’s, brother and 2 sisters. They lived in Swift Current and Waldeck in Saskatchewan for several years before settling in the capital of the province, Regina. No giggling please. 😉 Helen has been in the insurance industry for 25 years and is now a manager at a large global insurance company. She has worked her way up to being able to take 4 weeks of vacation a year plus one which is unpaid for a total of 5 weeks. Helen didn’t have an opportunity to travel when she was younger, but did go on a cruise just before we met.

Paul was born in Liverpool, England and moved to Canada in 1982 when he was 13 thanks to bleak prospects in Northern England at the time. He accompanied his parents and his younger brother. Since they were sponsored for immigration by Paul’s Aunt who lived in Toronto, they lived there also. In 1984 the family moved to Regina (again, no giggling please) where Paul attended grade 12 and university. Paul started university shortly after turning 16 thanks to UK starting kids earlier than Canada and proceeded to fail first year Engineering dismally. After working for a summer and selling his most prized possession, a 1972 Oldsmobile Cutlass, he took off to Europe and Morocco for a few months with his friend Bob, had a blast and got bit hard by the travel bug. Upon return he knuckled down and graduated with a degree in Electrical Engineering.

In the fall of 1991, we met at a stag. Don’t ask. 😲 We’ve been together ever since. In the summer of 1993, things get a little fuzzy as there are conflicting stories about who followed who West to the City of Calgary. We rented there until 1997 when we purchased our first new home and then moved in 2004 to our current home that we built just outside Calgary. After moving to Calgary all of our vacations were camping trips to the spectacular Western Canadian Rockies. We did this for years and still only explored a fraction of them.

After living together for 7 years we decided to appease the families and make it official. 😉 So on a -30C January 15th, 2000, with a blizzard howling, we were married in our house by Naomi Whalen, the wife of Ed Whalen, a celebrity in these parts. We only found out later that he was waiting in his car on our driveway for his wife to perform the ceremony otherwise we would have invited him in. A few days later we jumped on a plane and started on an Aeroplan mile funded economy trip to Thailand: YYC-LAX-HKG-BKK-KBV-TST-KBV-BKK-CNX-BKK-HKG-LAX-SEA-YVR-YYC. 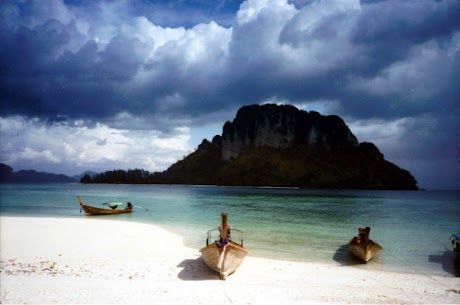 We had an amazing time and were hooked on Thailand. Since then, our upcoming winter 2016 trip will be our 11th time back. We always go for a month, which is fairly long for North American vacations. However since it takes 2 days of travel each way, anything less doesn’t seem worth it. Over the years we’ve (Paul) become experts at working the Star Alliance system and have managed several spectacular first class trips to Thailand. Sometimes we’ve gone completely around the world and others we’ll even go there and back the long way via the Atlantic just to prolong the “free” first class experience. While away, we meet a lot of travelers from all corners of the globe who are away for months or years. The thought of this always thrills us and often makes us discuss whether we should do the same. For some reason though, within a week or 2 of being home, we get caught up in our jobs again and the dream fades away. That is until our next holiday and its rinse and repeat.

So what’s really stopping us from long-term travelling? We don’t have any kids, debt, pets (Paul has allergies 🙁) or anything else to tie us down other than being mentally caught up in the “American dream”. We love travelling so why not do way more of it now? Well this year something clicked and we’ve gotten serious about it. 🙂