From September 2017 to January 2018 we lived in a van for just over 4 months when we traveled around the East and South East coast of Australia, Tasmania and New Zealand (North island, South island). We had 3 vans and all of them were Toyota HiAce’s. It was an absolute blast! We used Lets Go Motorhomes in Australia, Tassie Motor Shacks in Tasmania and Campa South in New Zealand. There’s something very cool about having a self-contained home that can take you wherever you want to go. After finishing those 4 months we decided that someday we would build a van and drive it around Canada , the US and into Mexico and points south. Fast forward to early 2020 when we were travelling around South East Asia and realized we had to cut our trip short by 2 months and go back to Canada due to Covid-19 (on March 10th). We figured that we’d have a lot of time on our hands and we had no idea when we’d be able to travel by air again so maybe now would be a good time to do the van build. 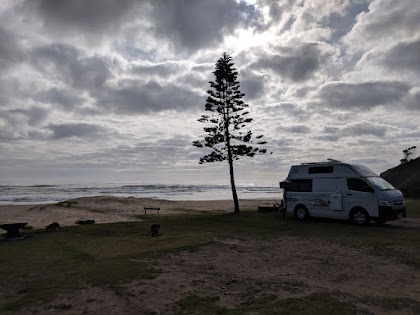 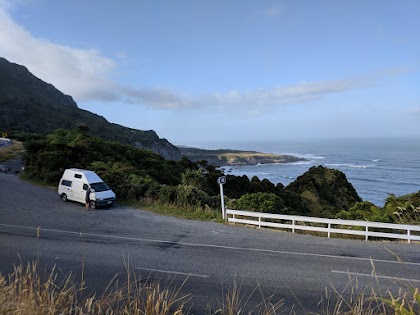 We had an awesome time in the Toyota Hiaces but these aren’t readily available in Canada and parts are likely hard to come by so that was out. The 3 main vans people kit out here are Sprinters (Mercedes), Transits (Ford) and Promasters (Dodge). After eliminating Sprinters for cost of ownership, we chose the Transit over Promasters for drive-train reasons. Basically we really liked the ecoboost and AWD options available with the Ford. We came up with a list of options and started searching. Unfortunately most vans on dealer lots are setup as delivery/trade vans and not for conversion to camper vans. We had resigned ourselves to having to order a new Transit with the options we wanted. The problem with this was that the Ford plant was closed due to Covid-19 and nobody knew what kind of time-frame a van could be delivered in. Needless to say it was going to be a long time. Late in May, Paul was bored and did some quick searches using the Ford.ca search engine. Sure enough, a few Transits showed up at a Lethbridge dealership (that weren’t there before) with pretty much all of the options we wanted. Only one of them was a high roof, long wheelbase (not extended) so we reached out to the dealer to see if we could make it happen. 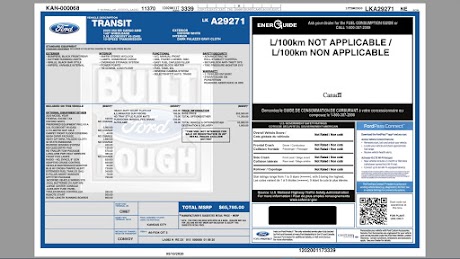 Window Sticker of the van we found on a lot in Lethbridge, Alberta

After the salesman had tried all of his Jedi mind tricks, we were able to get a price we were comfortable with. Use the free services (Unhaggle and Car Cost Canada) to find out how much the dealer invoice price is (individual options and total) and work from there. Don’t pay anything for stuff like corrosion protection, paint sealant, fabric protection, window VIN etching, admin fees etc. At one point I thanked the Salesman for his help and told him “its not meant to be, that’s cool”. Needless to say this removed the last of the pricing road blocks and we had a deal. It turned out that a local upfitter business had backed out of the Transits due to the financial uncertainty of Covid-19. After a quick road trip to Lethbridge we were now the proud owners of a new van. 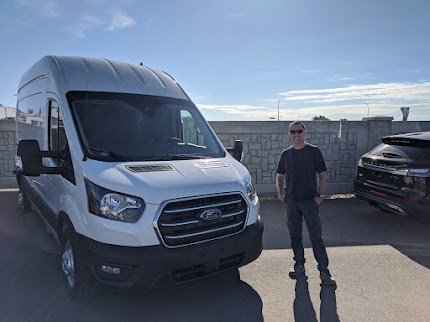 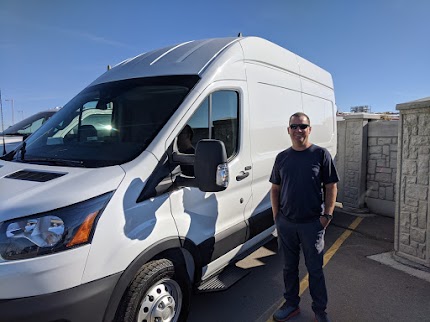 Now the hard work begins! We’ve done tons of research into vans over the years so we aren’t starting from scratch but planning out what we need to do is still a massive job. It is so easy to get bogged down with analysis paralysis. Another factor is that the US border is still closed, June 9th right now, so we can’t order anything to a border depot and go pick it up. Unfortunately many things are priced exorbitantly in Canada compared to the US even when factoring exchange, shipping etc. so we need to wait for the border to re-open before purchasing a lot of stuff for the van build or suck up the extra costs.

Here’s a couple of pics of the general layout of the van. Totally open to change. :) 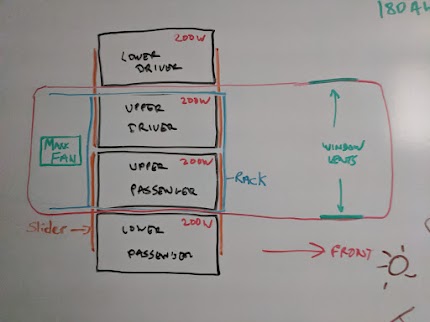 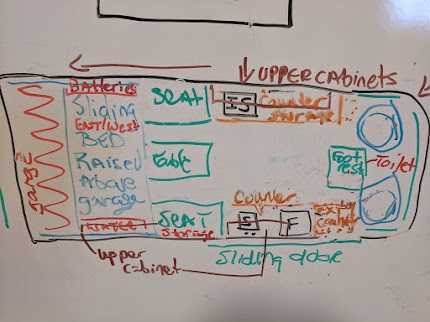 We don’t have an extended length van so we need to maximize space usage. We will have a ~38" deep garage with facing 24" bench seats next to it. The sliding bed covers the garage during the daytime and slides out at night to cover both the garage and bench seats which we don’t need while sleeping. I am 5'9" and Helen is 5'6" so E/W should work no problem.
read more
Van life

We knew we wanted to put solar panels on the roof so that meant we needed some kind of roof rack to hold them up there. We also had the idea of just using a tarp attached to roof rails and then to telescopic poles for a DIY awning setup. The first solution was the Weatherguard rails. I was already to pull the pin on them via Amazon when I found out about the Transit’s sloped roof.
read more
Van life

Every Canadian Van build needs a heater at some point. We’ve been camping in the Rockies in July and August and it has snowed. After looking at all of the solutions to the heat problem, one stood out: Chinese Diesel Heaters. They are by far and away the leader in price/performance, mostly due to the exorbitant costs $1000USD+ of brand name gas, propane and diesel heaters. Our transit has a gas fuel tank already but for several hundred dollars savings we are willing to add a small diesel tank.
read more
Van life

Removing the headliner makes insulating above a breeze. All you need for tools are an 7mm socket and a set of trim removal tools like this. With the following steps it only took about 10 minutes to remove and same to re-install. Pop out the 3 orange clips holding up the rear center of the headliner. Pry out and put aside 2 plastic trays in center of headliner.
read more
Van life

A big right of passage when DIY’ing a van is the roof fan installation. There’s nothing like cutting a gaping hole in a brand new van. No pressure! 🙂 I highly recommend you pick up a decent metal jigsaw blade. I believe the one I used was 25 teeth per inch and it cut the sheet metal like butter even with an old jigsaw. I also recommend watching as many YouTube videos as you can stomach on this as there’s a lot of good ideas (and what not to do) out there, they’re just spread out.
read more
Van life

The first thing we did to our new van was to add some Noico sound deadener to the metal panels. This stops a lot of the resonance that the larger panel sections are prone to and drastically reduces noise. We ordered 2 boxes of the 80 mil 36 sqft Noico and it worked out almost perfectly to do the walls, ceiling, above the front headliner, inside the side and rear door panels and inside the passenger seat pedestal (to help with noise from our Chinese diesel heater).
read more
Van life

Paul’s parents have graciously offered to let us park the van at the side of their house when its not in use as we are off travelling. There was tons of room for the van and it is nicely sheltered between 2 houses. The first time we parked it there it spun out a lot as the pebbles are quite large and round making them like ball bearings. Rather than digging holes with spinning wheels and having to fill them in every time we come and go we decided to make a better parking pad.
read more