Every Canadian Van build needs a heater at some point. We’ve been camping in the Rockies in July and August and it has snowed. After looking at all of the solutions to the heat problem, one stood out: Chinese Diesel Heaters. They are by far and away the leader in price/performance, mostly due to the exorbitant costs $1000USD+ of brand name gas, propane and diesel heaters. Our transit has a gas fuel tank already but for several hundred dollars savings we are willing to add a small diesel tank. There are 2 kinds of Chinese diesel heaters: 2KW and 5KW. The 2KW units are physically smaller, put out less heat and use less fuel but are a bit hard to find. For some reason the market is flooded with the bigger 5KW units, often re-branding them and incorrectly selling them as 2KW units. After researching we found many examples of people saying a 2KW heater is more than enough for a van sized space. So we picked up a “real” 2KW heater from HCalory on Aliexpress for $160CAD. Luckily they had a US warehouse and it only took about a week to get to Canada. We also bought an Afterburner for $160 CAD to replace the gold heater controller the unit came with. The Atferburner adds a myriad of extra features over the included controller, including WiFi/Bluetooth control and monitoring of the heater. So for less than a third of the cost of a brand name heater we should have a very capable setup. After it arrived we set it up on a workbench to make sure that the heater and Afterburner work before installing them. Sure enough, it all fired up perfectly on the test bench with the exhaust pipe bent to fit the heater install location under the passenger seat. We now know for sure that there is more than enough heat for the van from the 2KW unit. 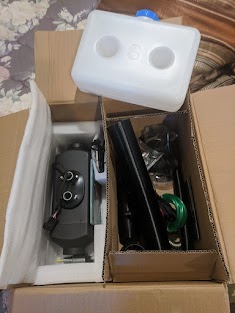 1 week to get to Canada 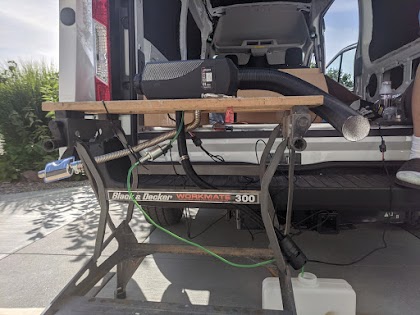 Bench testing with the Afterburner 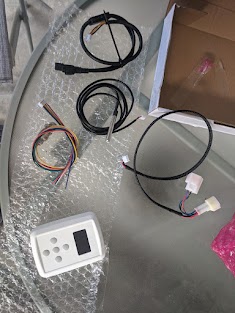 We decided to install the heater under the passenger seat as this is a spot with the perfect space for a heater that is currently unused. It’s a tight fit under there once all of the hoses are attached so you have to measure 30 times before cutting any holes in the van floor. Make sure to look at all of the pictures to get an idea of the space you are dealing with and where the heater needs to sit for the pipies to fit. Move the wiring out of the way under the seat and cut out the carpet. Take great care picking the spot to mount the heater. The space underneath is small so make sure to use it efficiently. At one point I thought it was impossible to tighten the heater bolts in this space but stay patient as it does work. You want your heater bolt holes to be as close as possible to the double thickness lip of metal next to the area you cut the holes in. Removing the seat is easy with 4 main bolts and another holding on a connector underneath. Use a punch to mark the holes for your drill so it doesn’t wander. You’ll see a nice curve in the metal of the jack storage box. If that curve wasn’t there the exhaust pipe would be way harder to fit. Thanks Ford! 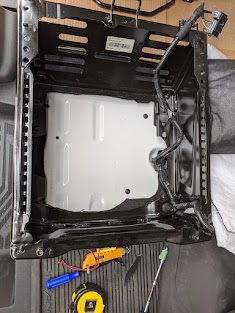 Trim the carpet under seat 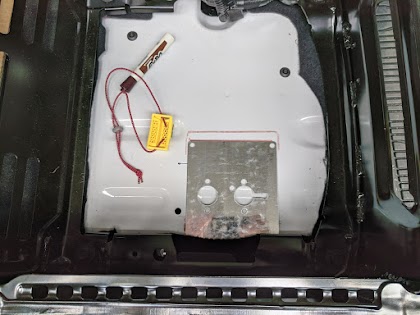 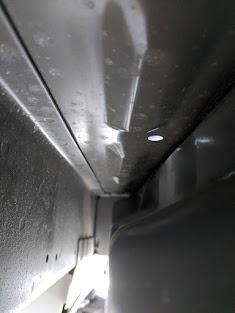 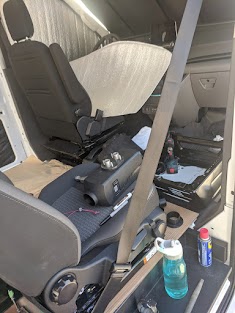 5 bolts and seat is out 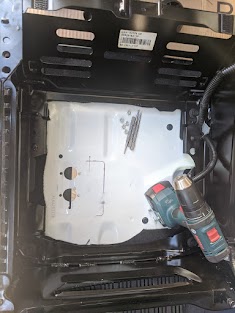 Use a punch to mark for drill. 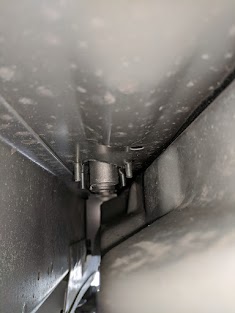 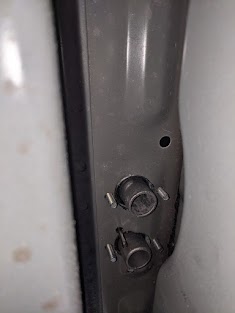 The curved metal is a life saver

The 5L tank fits perfectly in the passenger foot well without affecting entry/exit and is easily accessed for refilling. I could put a couple of plusnuts in the jack cubby hole cover so I could bolt the tank to it. Then if I need the jack I’d just have to undo a couple of bolts. To help keep the exhaust pipe temps from melting the foam jack holder I’ve ordered a fiberglass sleeve that will go over the exhaust pipe. We were also thinking about mounting the pump on the wall of the seat pedestal, maybe in a sound insulated box? This means only a short section of fuel line would be outside (I’ve ordered 4mmOD/2mmID nylon line to replace the green silicon stuff). This setup would keep the required length of fuel line very short and all the mechanical/electrical bits would be inside, sheltered from the elements. Added a rubber grommet for the fuel line to pass through the metal floor and drilled the 2.5" hole for the exhaust vent in the rear of the seat pedestal. Need to somehow modify the plastic exhaust outlet so it’s not pointing slightly downward due to the angle of the rear pedestal plate. Also need to remove the 2 screws holding outlet to pedestal and replace with glue as even their tiny screw heads prevent the 2 outlet pieces from staying together. 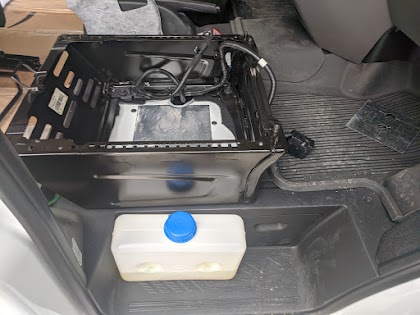 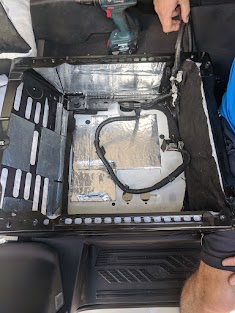 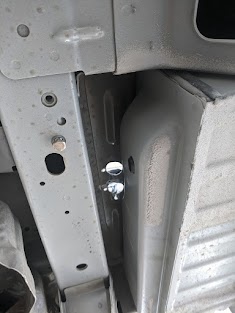 We found a box at the local dollar store for the fuel pump to live in and lined it with some leftover Noico sound deadener. Cut a slot for the pump wiring and a couple of holes for the fuel lines. Had to move the location of the fuel pump box under the seat pedestal from our original plan due to interference with the heater. New location has 2 convenient pre-drilled holes to allow us to use 2 nuts and bolts to mount the pump box. Placed a couple of pieces of foam between the box and seat pedestal to reduce sound transfer. Used permatex gasket maker to seal between the floor and heater adapter plate. Built up the sealer in the floor valleys to prevent any leaks. The slot and hole extending from the adapter intake hole is intended for when you mount the fuel pump outside and lets you run the pump wiring through. They became redundant when we decided to mount the pump under the seat. Try and have the mounting plate holes as close to the double thickness lip in the floor as you can get them to make attaching the exhaust pipe easier. You can see the rivet outlines in the flooring which helps visualize where the thicker floor section starts. You also need to keep in mind where the hot air outlet tube attaches to the heater and make sure you have enough space to attach it and curve over to the plastic outlet cover. 5L tank fits perfect in the passenger step making for short fuel line runs. 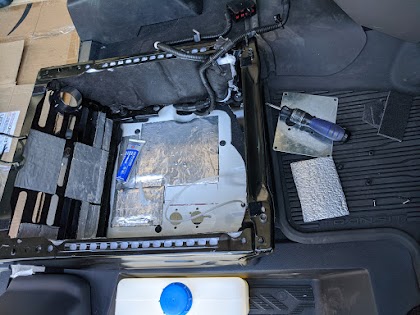 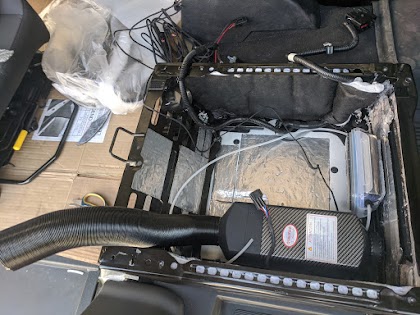 Finished attaching the 4 mounting bolts, exhuast and intake pipes and fuel line to the bottom of the heater. Paint the edges of your holes to prevent rust. We used permatex blue gasket maker to build up the valleys in the floor to give a good seal between floor and plate. We also used blue loctite on the locking nuts for the heater. The space is very tight so a small 7mm wrench and a lot of patience is required. Makes for a crazy finger/forearm workout. Hung the exhaust pipe with bailing wire. Tore apart the silencer that doesn’t silence (observed in our bench test) and made it into a simple end cap to prevent critters from nesting. Once you dismantle the silencer and reassemble with just end cap and foam you can push the intake pipe into it. Its a tight squeeze but once in there the silencer can’t move. If you look at the next picture below right, you’ll see a recessed curve (lower right) in the top of the sheet metal jack box. It’s almost as if some Ford engineer was thinking about us heater installers as I’d hate to install the exhaust pipe without the extra bit of space provided by that curve. We fired up the heater and pump in their final location and everything worked great. When we put the Noico’d lid on the pump box there’s a noticeable reduction in sound. Will use some bubble wrap inside the box so the pump is essentially floating inside without touching any surfaces, minimizing the transfer of noise from the pulses. 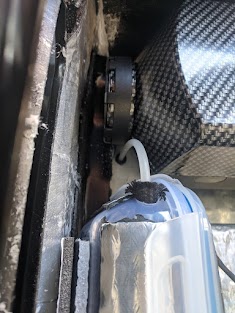 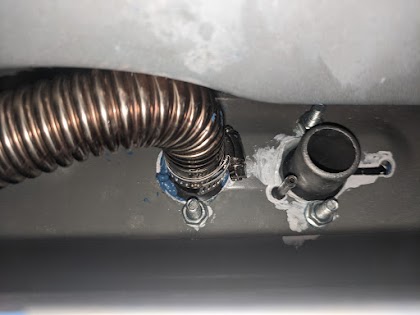 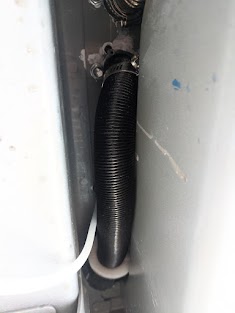 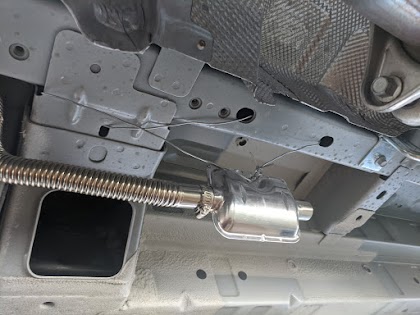 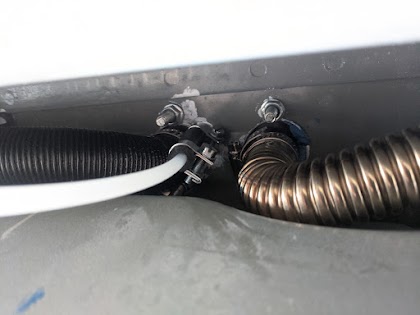 7mm wrench and patience for the win! 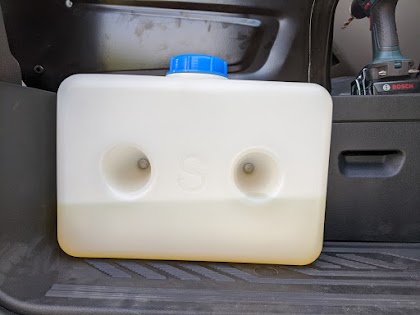 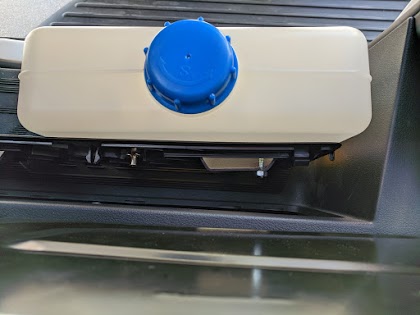 Tank comes out with snap on door

Added the rubber grommet for the fuel line between the tank and pump. Even with our smaller 2KW heater there' s not much space to fit the heater outlet pipe. I think a longer heater would have to be installed at an angle to the pedestal wall for everything to fit. You can also see the fuel line exiting the pedestal between the tank and pump inlet. When the passenger door is closed, the tank fits perfectly with just a small deflection of the plastic cubby wall on the bottom of the door. 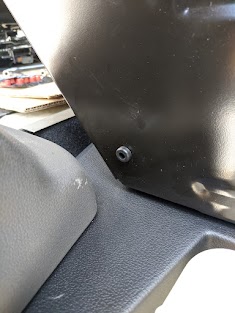 Another grommet for fuel line 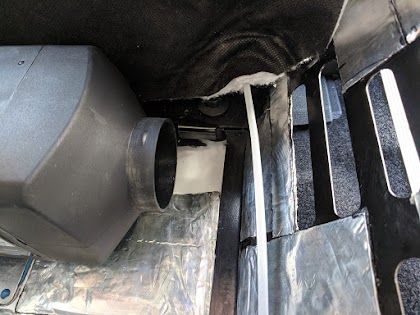 Even 2KW unit is a tight fit 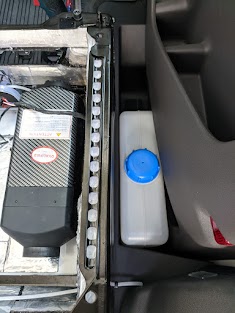 We used a step bit to drill the 1" (25mm) hole in the top of the 5L tank. After trimming the stand pipe to about 1/2" off the bottom of the tank we added a short section of hose and then the chainsaw filter we had picked up in lieu of using the crappy filter the heater came with. After sliding the rubber and steel washers onto the fitting we tightened the supplied bolt to snug down the stand pipe to the tank. Next we attached the outlet tube between the heater and the passenger seat pedestal fitting. Everything still fit thanks to taking our time measuring everything before cutting holes. Finally we put split loom over the fuel line for a bit of extra protection. Using the CCP for 12V and one of the ground spots we fired up the heater. We had to prime it for a bit to get the fuel to the pump. After that it ran smoothly with no smoke. We’ve left all the wiring under the passenger seat until we know where we want the Afterburner and temp sensor to be mounted. 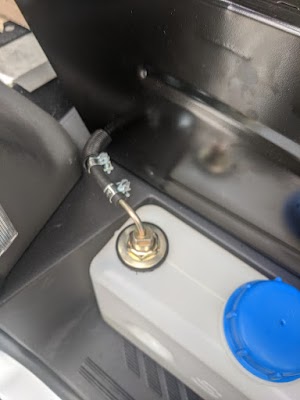 1" hole was drilled in tank for stand pipe 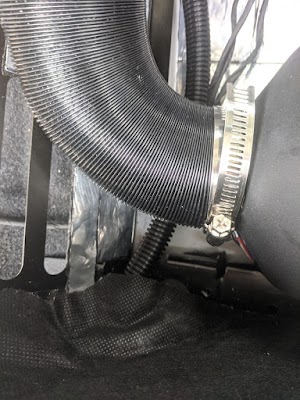 Heater outlet pipe all clamped down 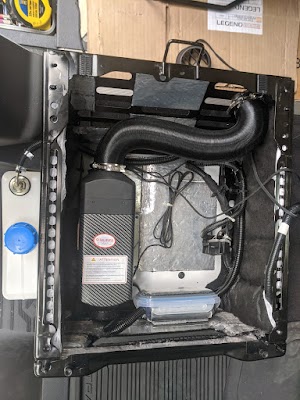 All ready for a final test run 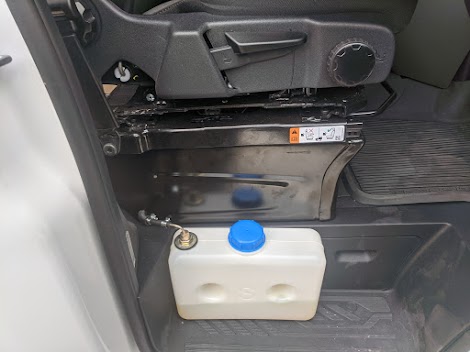 Very happy with the tank location 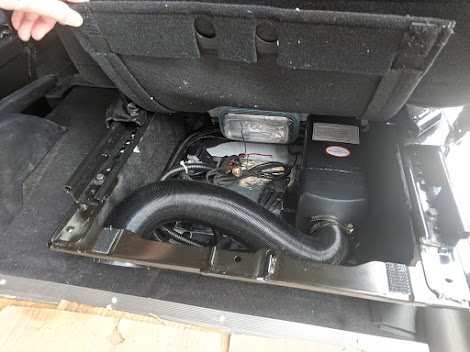 Definitely the perfect spot for the heater!