While in Thailand, we had made the huge decision to go back to Canada for the summer and sell the van. We had a pretty decent flight: BKK-NRT-YVR-YWG. Paul had used our eUpgrades with Air Canada to change an economy flight to business class via the latitude-attitude technique. Since the first leg from BKK-NRT was on ANA we were in economy but the next 3 flights were all AC business class. AC is one of our least preferred airlines but we couldn’t let these e-upgrades go to waste. There was a small delay in NRT, the plane arrived late, there were some “mechanical” fixes but all in all it was better then expected. Canada didn’t require PCR tests for fully vaccinated people anymore so it was nice not to deal with that again in Vancouver, also no quarantine. There was still random testing and for various reasons the main airports in Canada imploded so we weren’t sure what to expect. The security lines weren’t open on time, if at all. They were also understaffed so long line ups and delays on arrival for those getting connecting flights. Luckily we weren’t selected for testing and had loads of time to get our connection to Winnipeg, but many people missed theirs.

We wanted to make sure we were covid free, so planned a few extra days in Winnipeg at the airport Courtyard Marriott and the downtown Winnipeg Delta before heading to Glenboro. We enjoyed a couple of weeks with Bill, Tracy, Joe, Mike and the dogs. Max had gotten even bigger and more slobbery but still adorable! We recovered from jet lag, ate loads of Tracy’s delicious cooking, indulged in some of Bill’s mixology, loaded all our stuff into the van and got organized. It was really hard to say goodbye, but it was time. 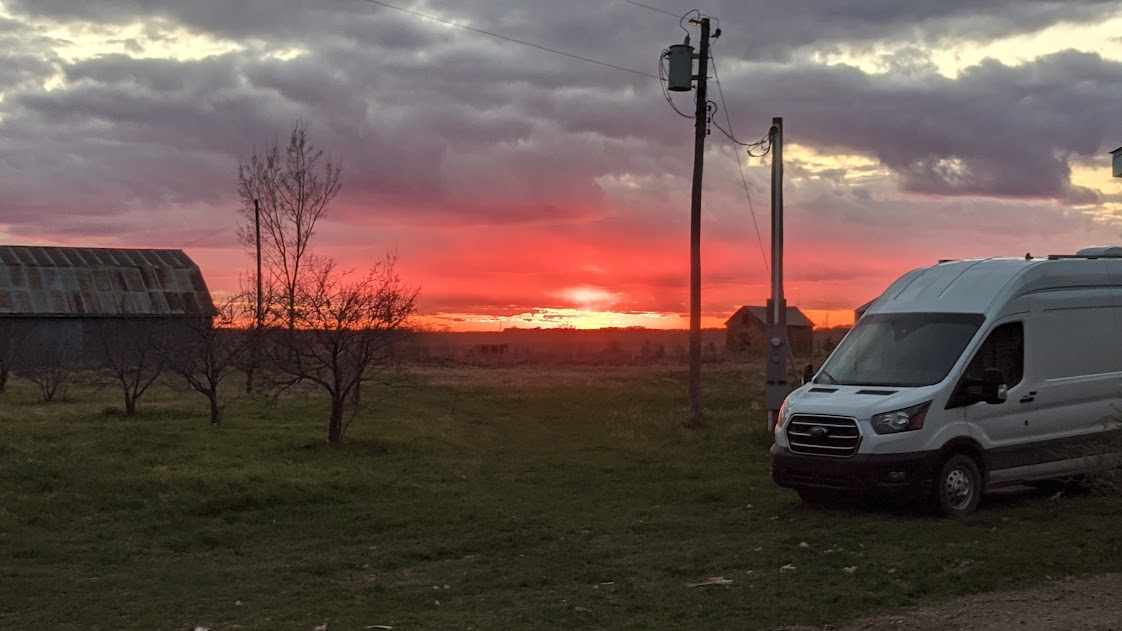 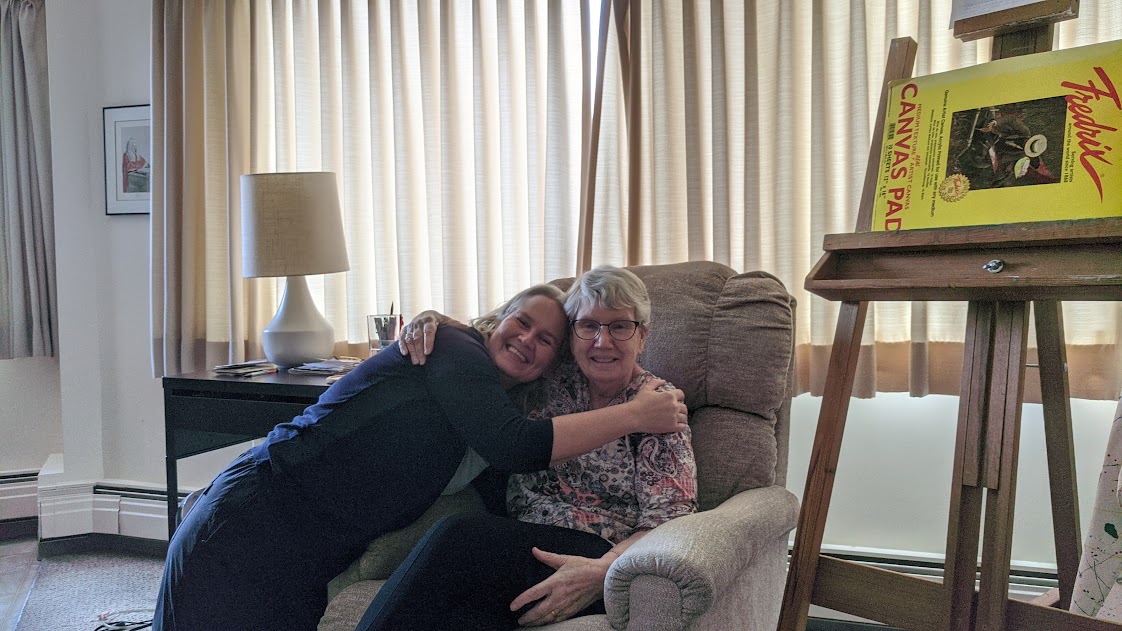 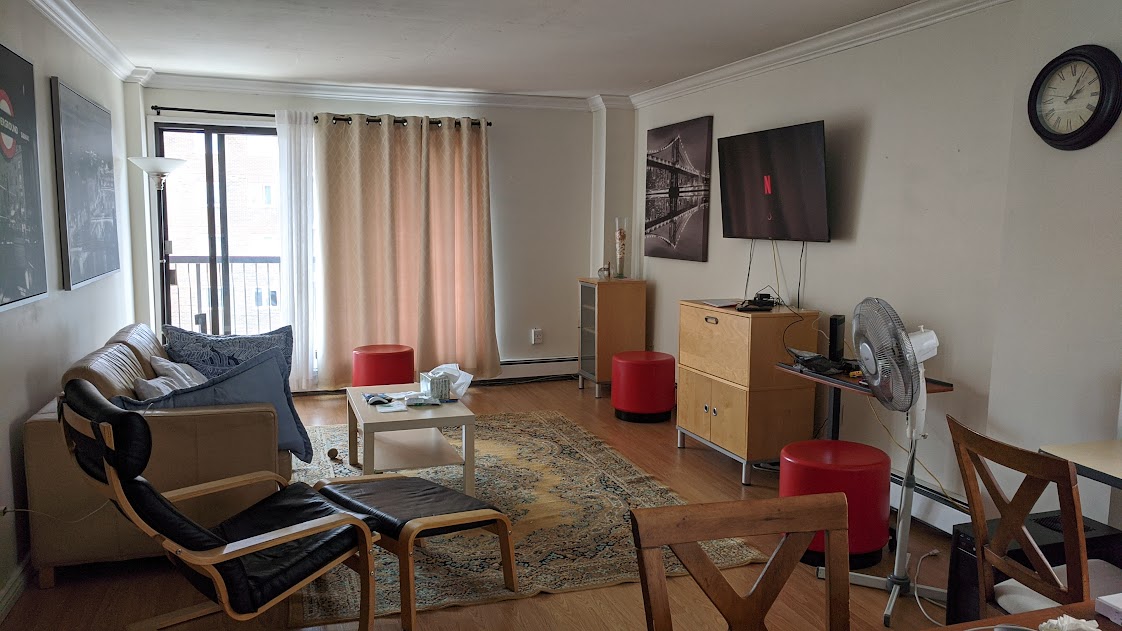 We loaded everything up and headed to Calgary on May 25. The drive was long, it was windy, there were storms but it was the start to another new adventure! We arrived at rush hour and got a quick reminder that summer is construction season in Calgary. Luckily our Airbnb was a nice little oasis and we were able to recover. First stop though, was to see my Mom!!!

We had been looking at apartments online but had found that short term furnished rentals with parking for a van were not so easy to come by and very expensive. We had contacted about 10 places but by the time we got here, most were already taken. We arranged appointments but by the time we actually were able to view anything, there was only one apartment left. Lucky for us, the landlord liked us, we were able to get van parking and it was in an area that we knew. The location is just a block away from the apartment we had downsized to in 2016… seemed fitting really. We were also very close to groceries, transit and everything we needed.

We ended up with a two bedroom unit. It’s an older building but we are on the top floor and in the end unit so it is quiet. The apartment itself is comfortable enough and, while it showed its age and not everything was perfect, it had everything we needed. The location made up for any shortfalls and all things considered, we were lucky to get it. Note - when looking for flights back to Canada… Paul found us a really, really good flight back to Thailand at the end of August, 2022. We took a chance and booked it thinking in the worst case we would have to change or cancel it for free if we didn’t get everything finished. It’s EVA Air, YYC-YVR-TPE-BKK all in business class… yay mileage rewards! Transit in Taipei was still closed but rumors were that it would be opening up in the summer. We got a re-entry permit before we left Thailand so we can return on the same visa and don’t have to do everything again. The plan is to come back to Chiang Mai, Thailand after selling the van and get our bearings before deciding what’s next.

Now we had an apartment sorted, it was time to list the van and start getting things sold. We had no idea how long it would take, but figured we could use the van to move and then head out on a road trip to Creston, see Paul’s Dad and our friends Pati & John. We were completely unprepared for what happened next. Within hours of it being listed we had numerous people get in touch and an offer on the table. Incredibly, the offer was for more than what we paid for the van brand new in May, 2020 and now it has 10K km on it. The resale market for vehicles is insane right now! The buyer was ready to come get it the next day. We let them know we needed it to move and arranged a pick up for a few days later. Wow!

The downside was they weren’t interested in using the van as a camper so didn’t want the items we had purchased. We managed to get everything in the apartment so it wasn’t a dealbreaker. We spent most of June and July spamming any “for sale” sites with the parts we had for the van. Paul connected with someone local who was waiting on his van being delivered and he bought a bunch, including the big items like the fridge and solar panels. Paul has whittled away selling items here and there, so we don’t have too much left. We finally managed to sell the last items, sink, faucet and cooktop in the beginning of August which was such a relief.

With the van being gone we have become transit users and walk whenever possible. For those that used to get my daily train stories, it’s gotten even more crazy. Sad and hard to believe at the same time. We started walking to get to my Mom’s. We googled to find the flattest route, Calgary has lots of hills, and it’s about 5.5km each way. It’s a lovely walk through beautiful neighborhoods with huge trees and flowerbeds along the Elbow River. When it’s going to be hot, we leave early in the morning so we are home before the main heat of the day. Realized this is for the best after I arrived home in the heat and had to interact with a person of authority during a police incident. I managed to be awkward even though all I had to do was let them in the building.

We walk for groceries, to take the train and for the sake of walking. We even rented some electric bikes to try out. My biking ability hasn’t improved, I thought the bike was totally electric and I didn’t have to pedal, a bad idea when about to head up a hill. The helmet is also way too big for my head and ended up sitting off to the side. Paul didn’t even try it since it would have been too small. Needless to say, we’ve only ridden the once and we walked back. 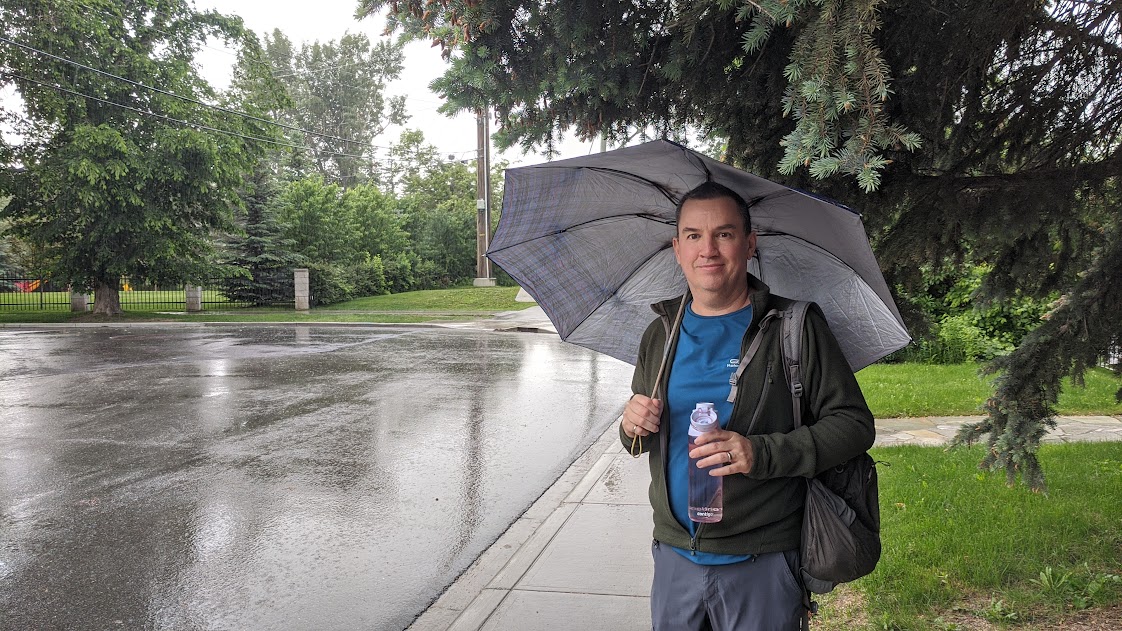 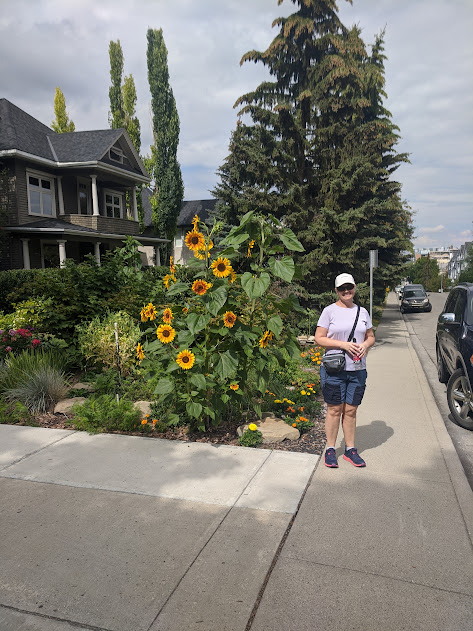 Calgary has been great. Aside from spending time with and helping my Mom, Paul’s Dad came for a visit. When we sold the van so quickly, we thought we’d just rent a vehicle when needed. Turns out, we weren’t able to because, like apartments, vehicles were very hard to find and expensive. It was nice that John made it down and worked out great for all. We walked down to meet him by Chinook and drove back downtown, and vise versa when we headed home to make it easier. We had a nice time, went for a tasty breakfast, drove up to the Asian food mart for his favorite curry powder and he helped us get our boxes in storage.

We’ve managed to meet up with some friends and had plans to see others. We didn’t get to see everyone we wanted to, summer is a busy time, but it was wonderful to reconnect with those we did see. You realize that you don’t need to talk all the time to enjoy peoples company. We’ve gotten our healthcare needs sorted, apparently early retirement agrees with us. We will miss the van but we couldn’t pass up making a profit on it and can always do it again if we want.

It was great to be back in Calgary and we appreciated every minute. All in all, it seems that even though it was the hard choice, we made the right decision. Another thing that was reinforced by this trip was how much money we save staying in Chiang Mai vs Canada. The cost of living in Thailand is at least half of what it costs in Canada and probably even lower. Anyways, time to head back to Thailand! 😄 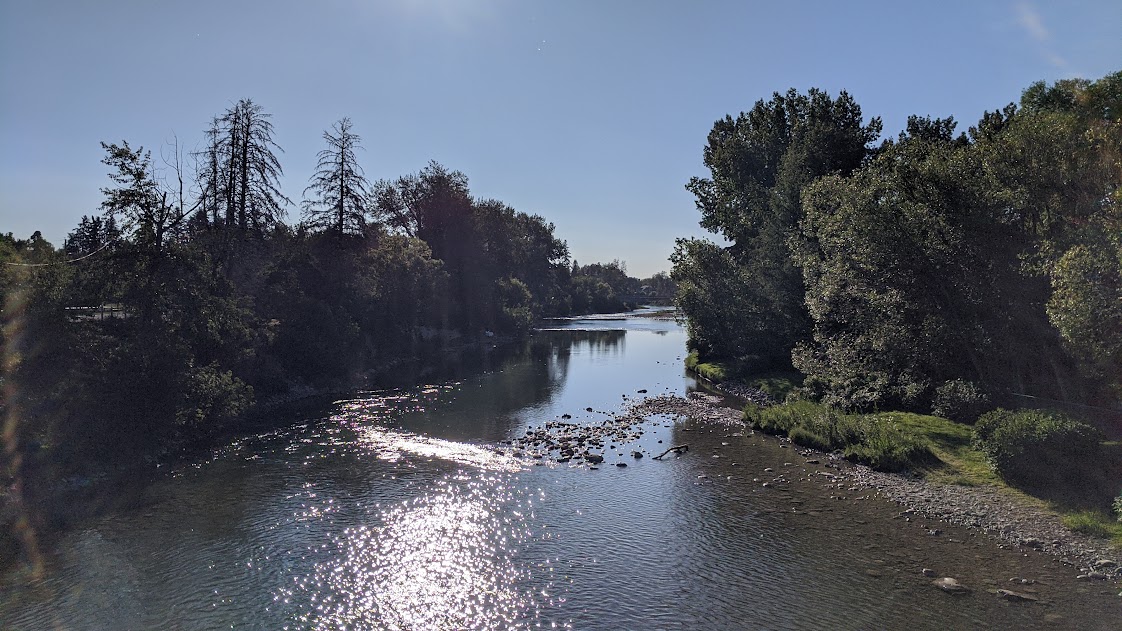 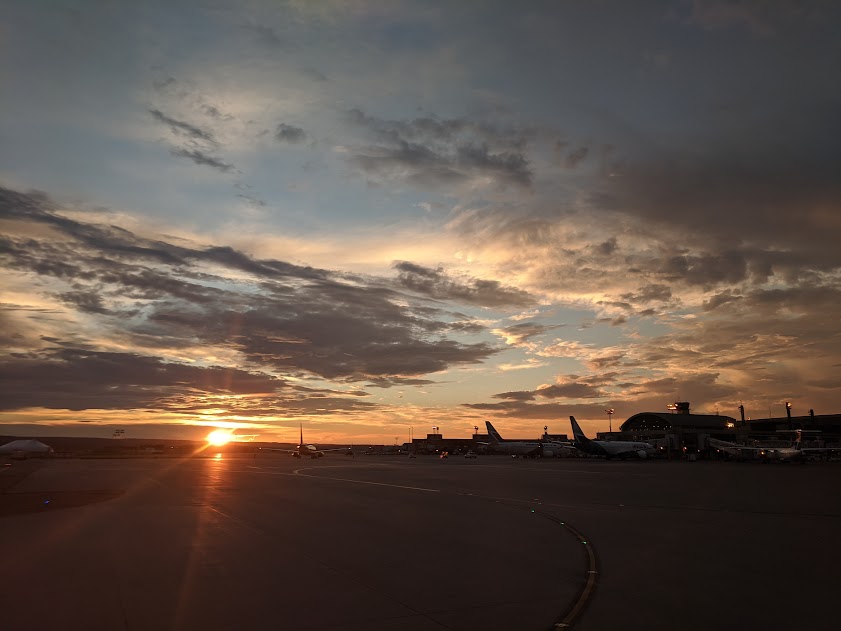