After some very crazy, hectic, emotional weeks we are on our way. We left on the first leg of our adventure on February 28, 2017! Before I get into too much, we need to send a big thank you to Paul’s Mom and Dad. We wouldn’t have made it through the last weekend without their help. Between letting us store things, taking care of our mail and our car (VW TDI to be returned), helping us pack up and clean the apartment and taking us to the airport… well needless to say we got it all done and I was even able to spend several hours with my Mom the day before we left with no stress. Ok, this is me so there was some stress but it was under control. 😏

We had our Phil’s Diner breakies. Our first breakfast after we arrived in Calgary in 1993 was at Phil’s so we decided our last should be as well. We went to the Pig and Duke the night before we left to celebrate being done and Paul’s Dads birthday.

We started with an early wake up on February 28th so we could make it to the airport and through any glitches with customs. We shared a Tim Horton’s with Paul’s Mom and Dad, then said goodbye. It was all a bit surreal, but it kinda felt like we were just leaving on our usual month long holiday in Thailand. 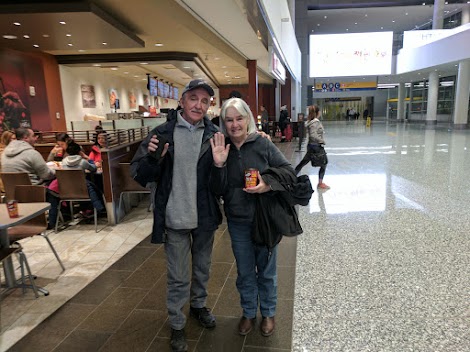 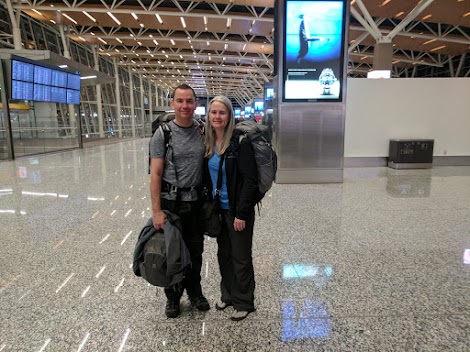 Finally on our way!

That was it… we were now on our way! Freaky? A little… exciting? Majorly! Security was smooth and after a bit we got on the plane to Chicago. There was a minor issue with the carry on, we weren’t the first people on board and the luggage area for our seats was already full. Paul managed to get ours a little further back and we settled into our flight.

We had 5 hours in Chicago with a terminal change. We debated going into the city but decided not to, concerned about it being too rushed, getting through security, etc. Instead, we hung out in the lounges. Ahh, the privilege of business class. 😎 While we were there we wandered through the airport, watched the news, read, etc. We also watched the weather. There was a tornado warning in place but thankfully, nothing happened. We easily boarded our Swiss Air flight to Zürich.

What can I say? I was so glad we used some of our Aeroplan air miles for business class. The plane was newer and the pods were really comfortable. The service that we got was fantastic, the food was great and even the crying toddler in front was bearable. The Swiss Air people sure know how to do gluten-free meals, some of the best airplane food I’ve had and no rice cakes!!! The only issue was that anytime Paul needed to get up, he had to climb over me when I stretched out. Not a major issue for us. 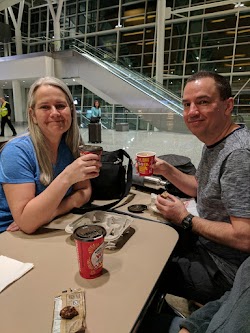 Our last Tim Horton's for a while 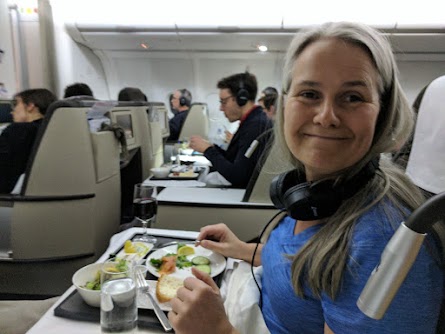 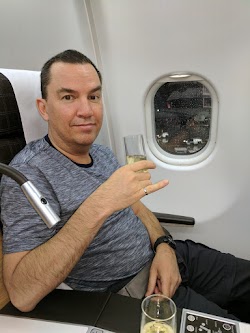 A little champagne before take off

The flight was great and we landed in Zürich on time and ready to go. We were off the plane and eventually found the lounge so we could have a shower, put on some warmer clothes and figure out our plan for playing tourist. We had 7 hours in Zürich so decided to explore. Customs was easy, everyone in the airport was friendly and helped us find where we wanted to go.

We decided to store our bags and tried the lockers, figured we had it covered since we had Euro’s… not so much, we needed Swiss Francs. Luckily there was a manned luggage drop close by so we were able to leave our bags and pay by credit card. We were off on our way to explore the city.

When we were researching what to do we came across a post that talked about taking the train into town and walking the loop. Easy peasey, went to the auto kiosk, plunked in our money, got the tickets and on the train. I pointed out Zürich Insurance signs, I worked there for 7 years and the head office is, of course, in Zürich.

We made it to the main train station and headed out ready to be tourists. We had a map, our snacks and water in our trusty day packs. In our plane amenity kits we were given neck warmers. Perfect, as it was a bit cold and they could double as a hat. 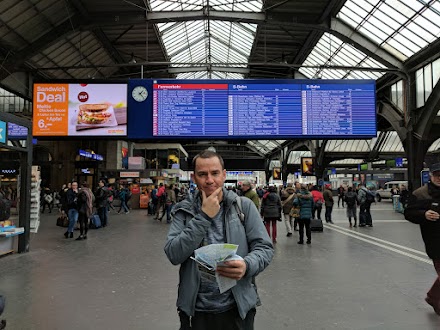 Figuring out trains in Zürich 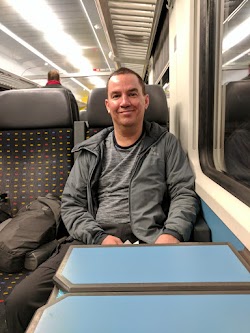 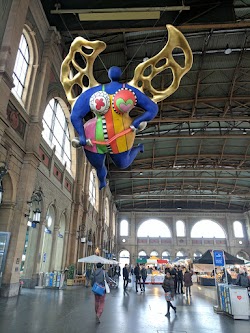 Good thing we stopped at the information desk for directions. Apparently the train tickets we bought were not the right ones and we ended up having to get another set. Lessons learned – 1) go to the ticket counter to get your tickets 2) always select local currency for payment options on your credit cards.

Off we went on our tour of the city. It was really neat, cobbled pathways narrow streets, old buildings and all sorts to see. We walked through parks, by clock towers, exclusive shops, artsy shops and restaurants. 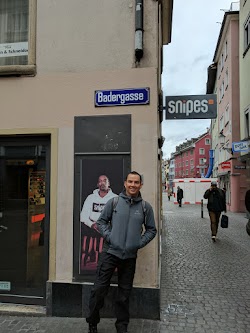 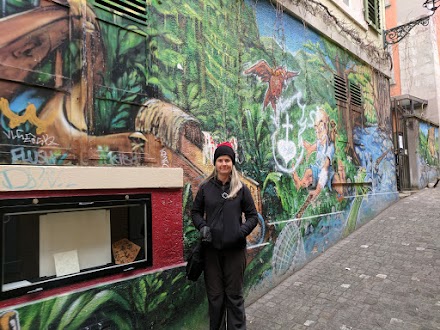 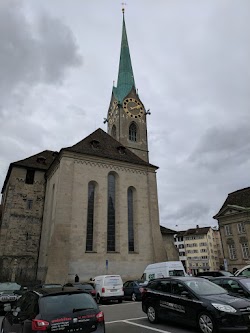 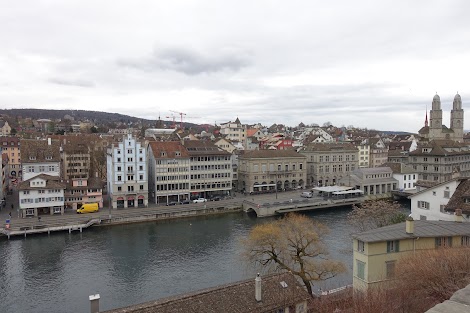 We walked for about 2-3 hours and had a great time. Unfortunately we weren’t able to get a ton of shots of the lake with the mountains. Made it back to the train station, used the correct tickets and off to the airport.

Onto Bangkok and Beyond

We collected the luggage from the storage shop outside ZRH airport, using lesson learned #2 and went back through customs. After spending some time in the lounge recovering from our walk in the city, we called our folks and then we were on our way to Bangkok. The Swiss Air flight to Bangkok was super smooth, again great service and food. We used our priority passes to get through immigration in Thailand. Since we only had a couple of hours in Bangkok, we didn’t do much. Managed to get our first of many sim cards, hit the domestic business lounge for a bit then off to Krabi.

In Krabi we checked in at the Baan Sabaidee Guest House, went for a walk, had a nice dinner, hit up 7-11 for some snacks and went to sleep. 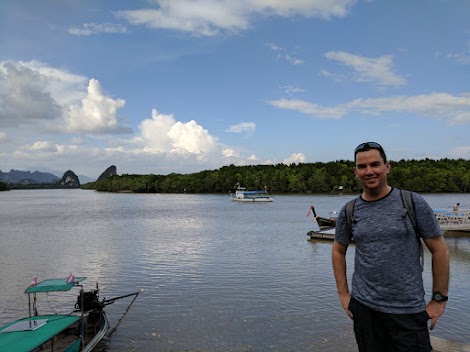 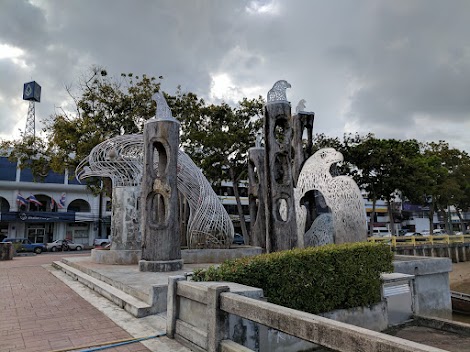 And that was the first leg! We left the next morning to head to Pak Bara and Koh Lipe. 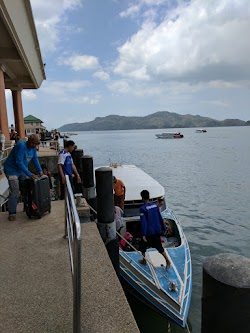 Speedboat from Pak Bara to Lipe 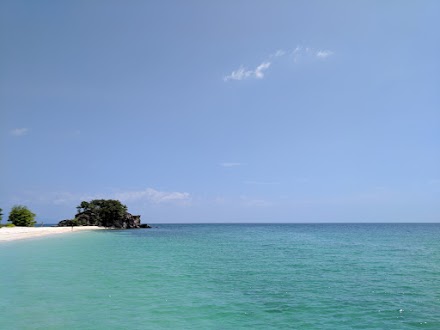 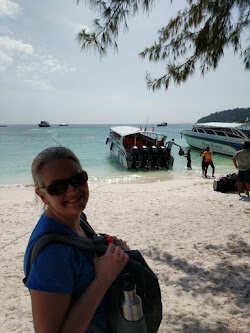 Finally on Lipe after 2 days travel