To get from BKK-CNX we had booked a flight with Thai Vietjet as the time and cost made it the best option. When we purchased the tickets, our credit card was charged twice. We made several attempts online to get it solved but nothing seemed to work. Luckily, when we checked into our flight they were able to give us an email address and we eventually got it sorted. Funnily, we had paid a little extra to book our seats so we weren’t at the very back of the flight… imagine our surprise when we boarded the plane only to find we were in the very last row. Apparently planes were switched and we paid for the privilege of being at the very back by the bathroom. Thankfully it is a very short flight. 😨

We got to The Siri and headed to our new apartment 605, our home for the next few months. It didn’t take us long to get organized and we settled into our routine. Jen, the building manager, was great and had everything set up so it was easy to get settled. It was a great feeling to be back. We started off with a walk to get something to eat, setup our sim cards and get some groceries. I bet you can guess that some of our first stops were Khao Soi Maesai and our local BBQ chicken place.

Because we were going to be on a long term visas, Paul had looked into opening a Thai bank account. Jen was able to get us the document we needed so we headed over to the closest Bangkok Bank branch, which was at the old Kad Suan Kaew mall 5 minutes from our place. Staff at the branch were great and about an hour later, we had everything set up. No more ATM fee’s for us! In hindsight, this was something we wish we would have done years ago. Having a local account makes everything easier. Plus the bank system is way more advanced, pay with a QR code scan and don’t even need to use your card at the ATM. Also, we can use this for the ubiquitous Grab app as our prior Canadian cards no longer worked with it. We spent the next few weeks catching up with old friends… you know who you are… visiting our favorite restaurants and just enjoying being back. A quick trip to Decathlon netted us some chairs for the balcony and we scoped out the best places to get Beer Lao. Turns out you can order it delivered to your apartment which was totally awesome… thanks Ness!!! That meant I wasn’t walking back from Tops with that tell tale clinking noise… 🍻 I digress. We ate our way through our favorite places, drank loads of coffee and walked around the neighborhood. We were treated to a hot pot at Ness and Ian’s with God and Yves. Ian even made me some gluten free carrot cake.

We headed out to Mae Tang for the day to see God and Yves’ place and were spoiled with some delicious Belgian stew, a fire pit and music videos. It was a great night and it was nice to see all the changes they had made to the house. Some cool storms and nice sunsets completed the perfect return.

Arriving on the Non O visa made it a fairly easy process to get the yearly extension based on retirement. We had already made a quick trip to Immigration to figure out exactly what was needed and grab some forms. With our documents in hand, we headed over to the Canadian Consulate in Chiang Mai for our verification affidavit appointment. Staff here were friendly and walked us through the process. 20 minutes later, after viewing the displays and a trip to the local coffee shop, we received our letter. We had made an appointment to go to Immigration for the afternoon and headed over to get our extension. About an hour later we had our extension stamp until January 2023! It would have been quicker, but I made a mistake and didn’t bring the proper form showing our residence. Our previous research and time in the copy shop was worth it!

Quick Tip : If you take Grab to the Airport Immigration office you will be charged a 100THB Airport tax. However if you ask Grab to take you to this car rental place across the street you save 100THB and there is a crosswalk right there. 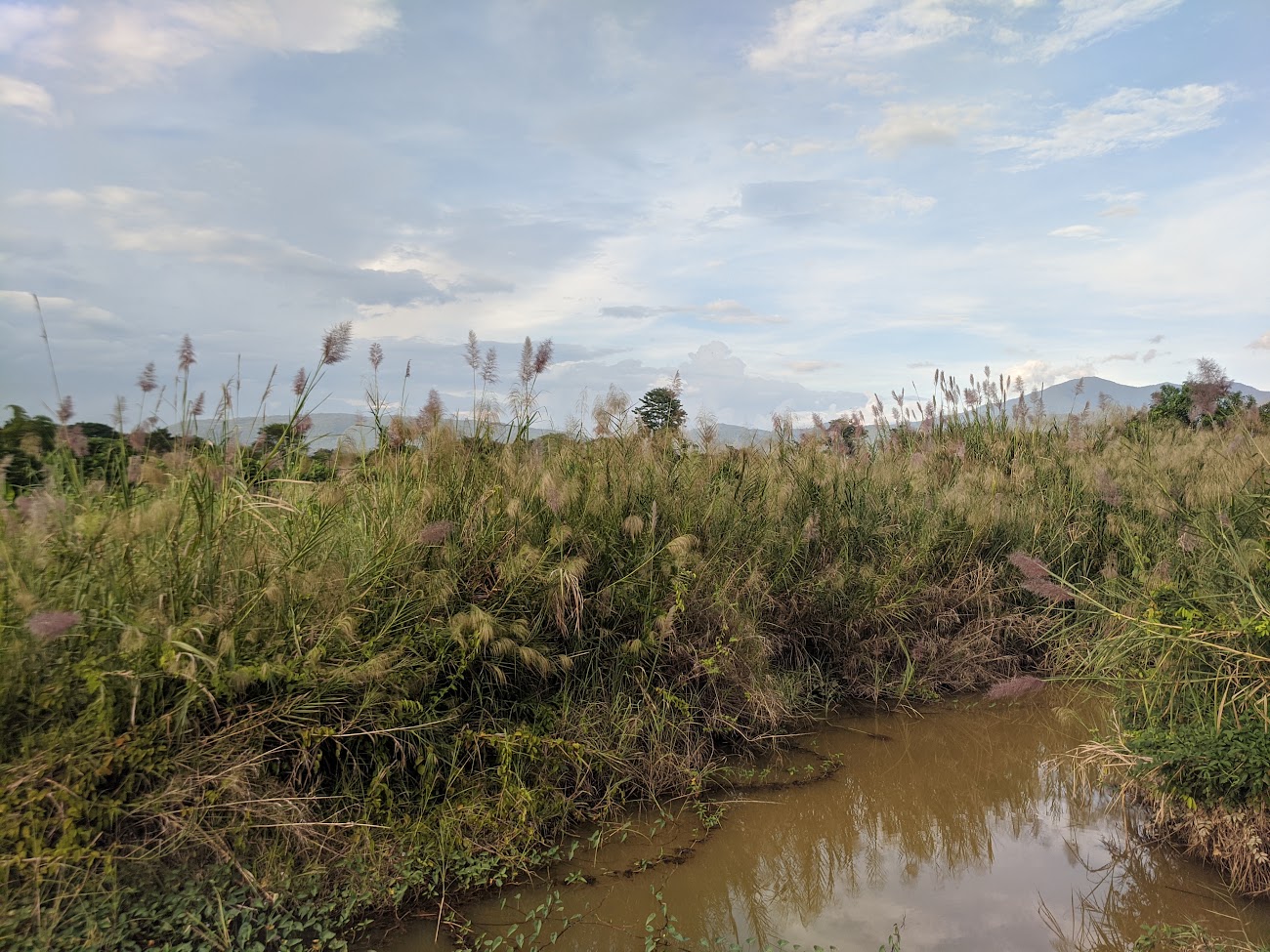 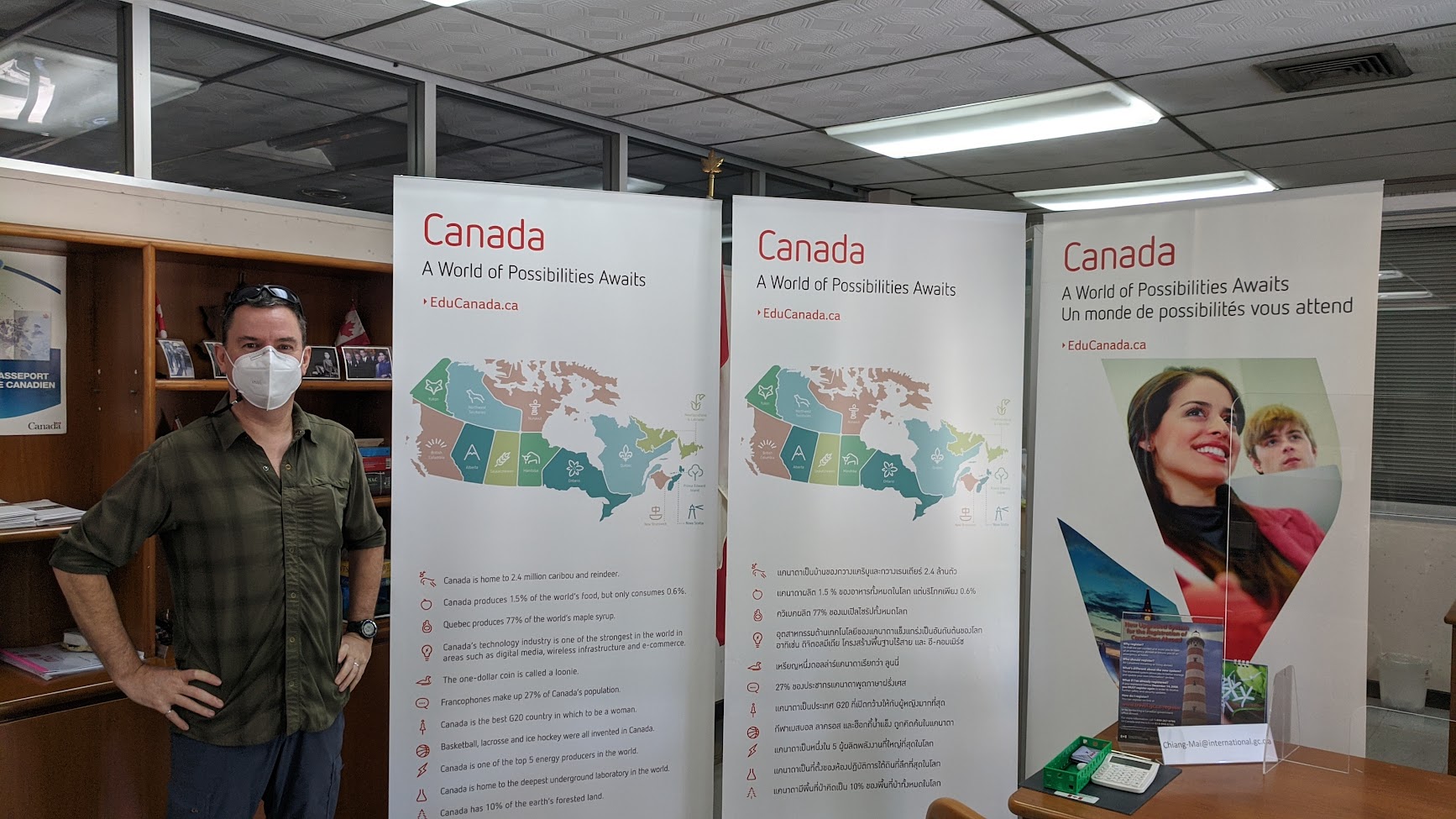 Thailand was slowly opening up and restrictions were being lifted so we were finally able to head to one of our favorite places. Dao and Chris had moved the Small House Kafe bar out to their property in Hang Dong, no chance of us being able to walk there. Dao sent us the address and we called a Grab Taxi and headed over. It was great to see everyone, reconnect with those we know and meet new people. Now that things were opening up, Dao started arranging red trucks to make it easier for people to come out on the weekends. The meet up was just around the corner from us, so it worked great and we had many good nights here, including New Years Eve.

We ended up spending a few nights in Pai. Never really a place that had been on our radar but God, Yves and Ness were going so we decided to tag along. Wasn’t really sure what to expect but we ended up having a great time. Ness drove us up and they aren’t kidding about the road having loads of curves, I can see why so many people get car sick. We went for a “moo kata” the first night with a group of God and Yves friends, then headed to the main walking street. We found a pub to watch the LFC game and ended up talking to someone who had lived in Saskatchewan. Next day we headed out with Ness for breakfast and drove to one of the waterfalls. Then we all spent the day together, went for lunch, headed down by the river and just enjoyed the day. That night we ended up at Vespa bar, owned by friends of God and Ness. We had a great time in Pai and were both glad that we finally went. 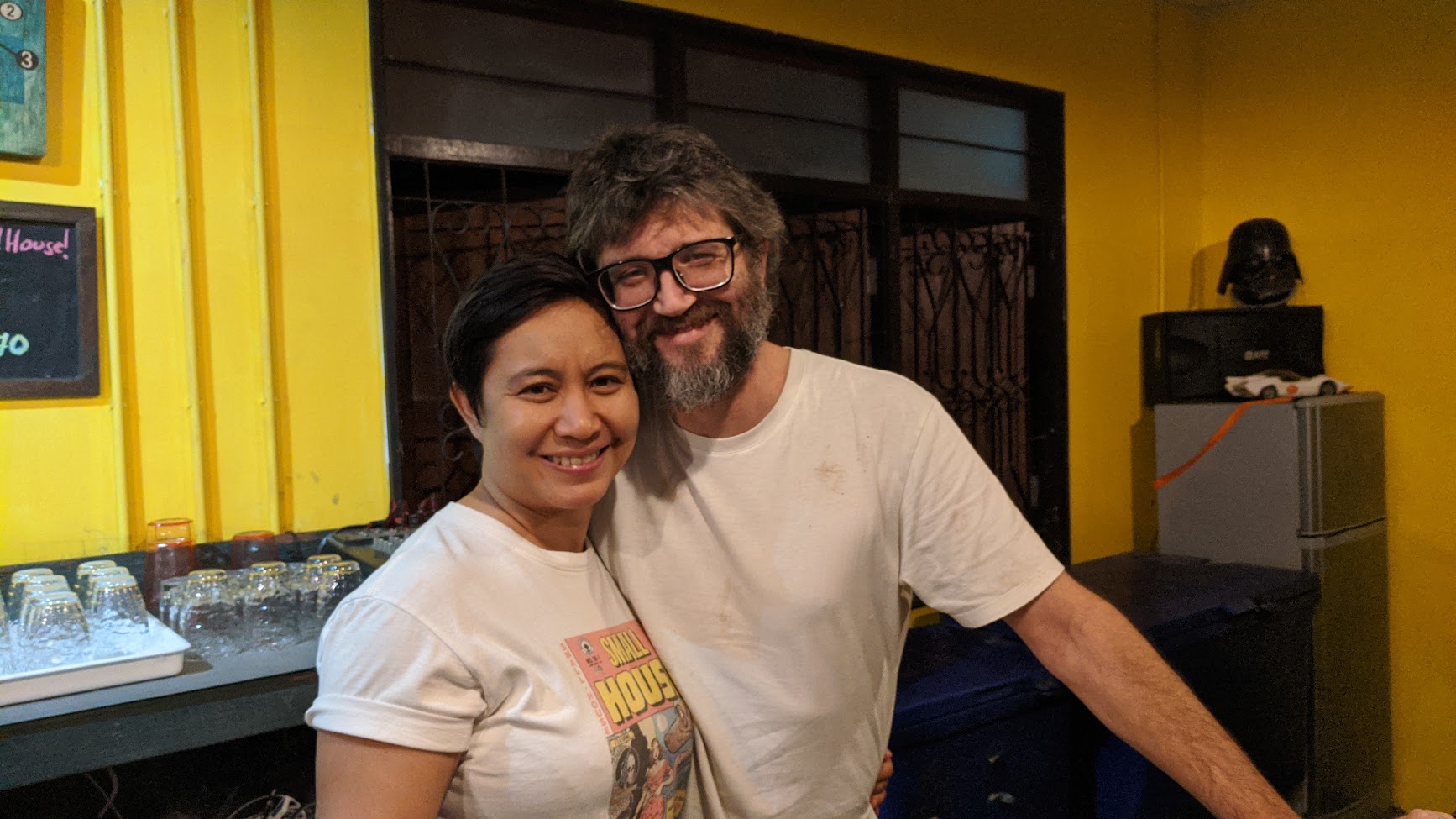 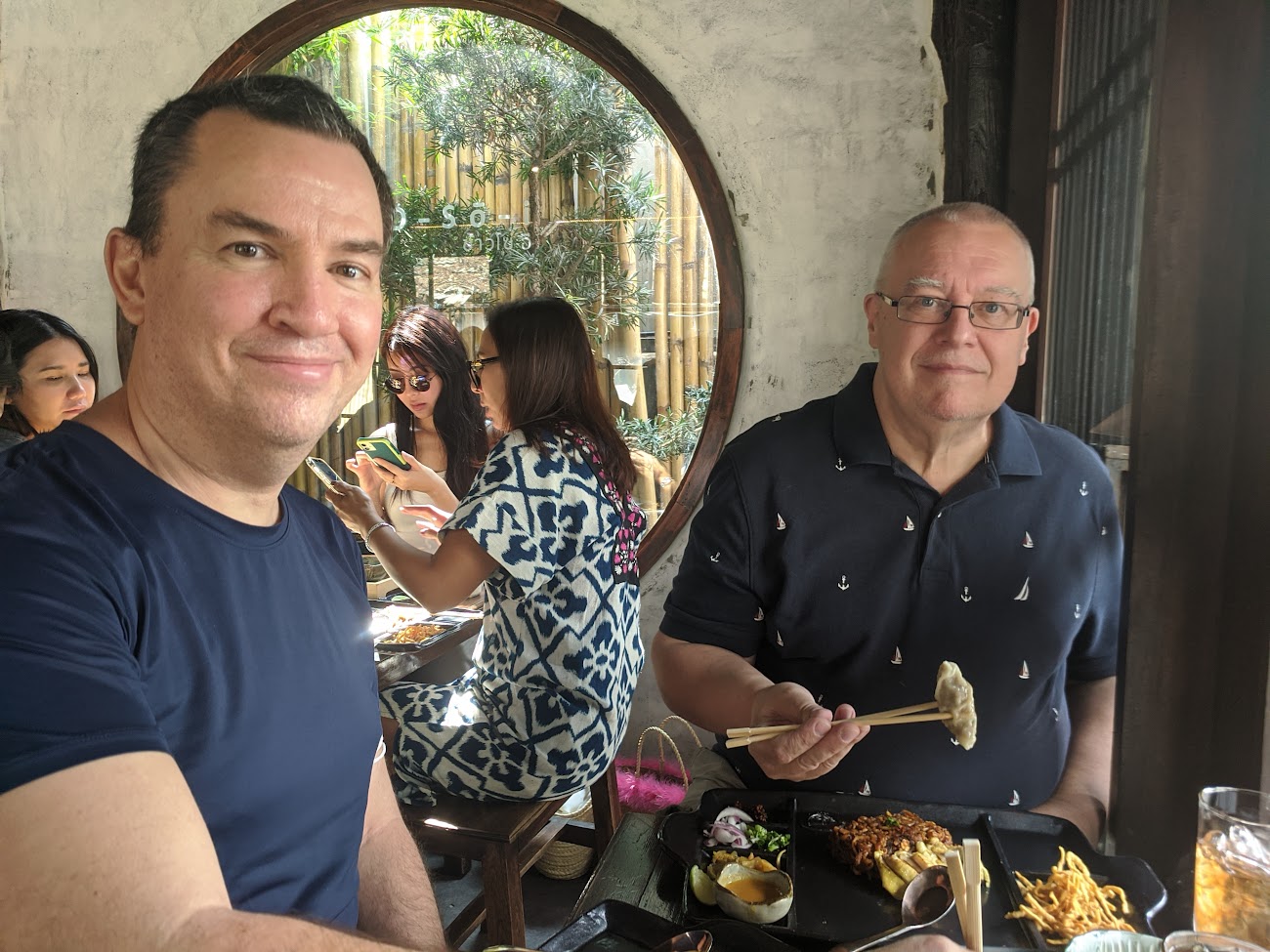 We were lucky enough to spend more time with Ian this trip. Not only did he spoil me rotten with gluten free baking, lending us his coffee maker and visits we also got to go for several nice meals. He took us for a really good Vietnamese meal, then a “fancy” Khao Soi and coffee down by the river.

Ness arranged a night out at his cousin’s place in the mountains! God and Yves met us out there and Ness and Ian drove separately so they could bring the “ladies”, Meghan and Sophia. We stopped at the same market for supplies… aka food and beer on the way out. Ness’ cousins are continuing to make additions to their place and it was great to see. They had friends over as well, so we had another great time. Ian has convinced us about the awesomeness of an air fryer and made some Nam Prick Ong. Oh and stops at legendary sausage occurred!

Covid continued to be problematic so we became proficient at the ATK self test. We managed to arrange to get a Moderna “booster” at Chiang Mai Ram Hospital on Christmas Eve. Glad to have gotten it, but bad timing… Paul was knocked on his butt over Christmas. All in all, another fantastic time in Chiang Mai. 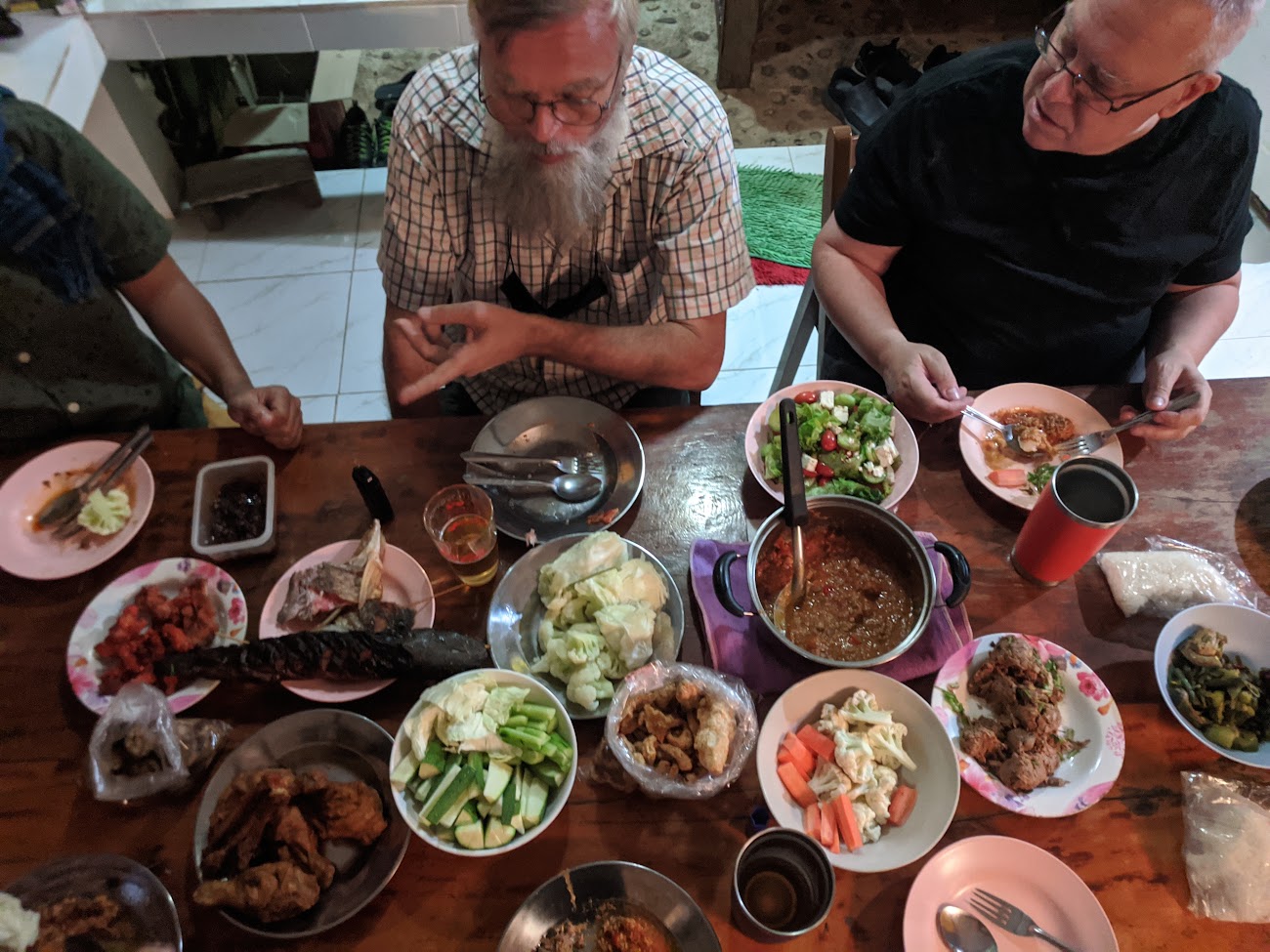