Our flight was mostly empty with maybe 25 people on board the Thai Airways Boeing 777, including crew. We were advised that masks must be worn for the 45 minute journey, and that no food or beverage would be served. It wasn’t a problem for us as we had a large breakfast before we left the hotel. The take off was pretty epic. You could really feel the difference in acceleration due to the very light load. No idea why they needed a 777 to fly 25 people for 45 minutes but it was nice. 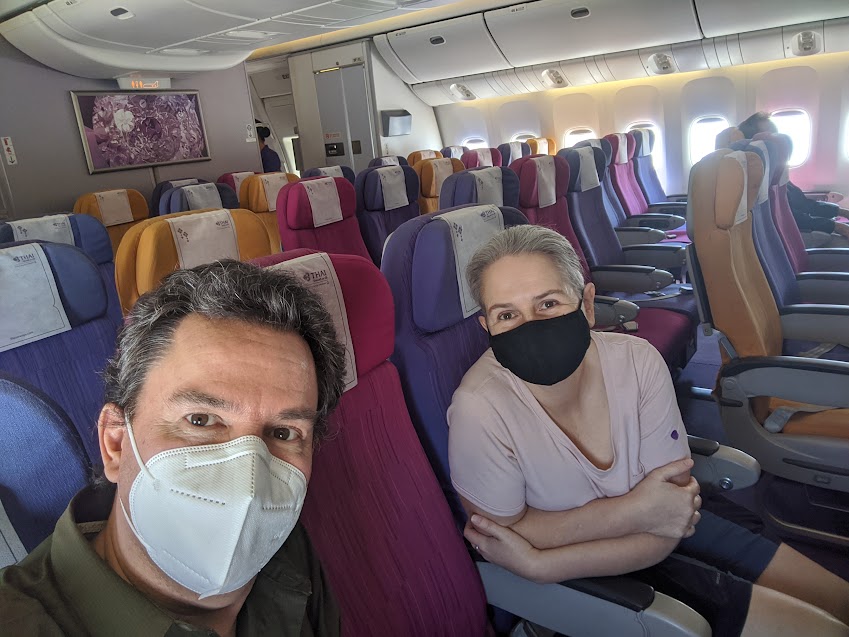 Landing in Chiang Mai was hectic. There was a health and document check by the luggage area and everything was blocked off. Apparently there was an app we were supposed to download that we hadn’t known about so couldn’t scan the QR code for information. Another flight landed, which was mostly full, so the area became jam packed and people were not able to distance. The majority of people did not have the proper app downloaded so the health people were overrun with all of us asking for help. The airport WiFi was also overloaded so we couldn’t login to download anything. Eventually, we got someone who gave us some forms to complete and we were able to get through to the other side.

We booked an airport taxi and headed over to Pansook Condo. After being in quarantine for 2 weeks, being around all the people was an adjustment. When we arrived at our condo, there was confusion as our host hadn’t notified the staff that we were coming and would need the key. The condo staff let us use their phones, gave us water and were great in helping get us sorted out. After about 45 minutes we settled into our apartment and headed over to Maya mall. We needed to hit the ATM and get some sim cards from AIS. We managed to get that finished and headed back to the condo.

We had only booked 3 nights at the Pansook. We had planned on wandering around the areas we liked to see what we could find prior to making a long term booking. With a few names in hand we made our way out to look at condos. Our first stop was lunch at Khao Soi Mae Sai for lunch… still delicious! Then House 33 for a latte, still great! We wandered around looking at 3 or 4 places, but didn’t make a final decision. Our top pick, The Siri was closed for the day so we decided we would go back bright and early the next day. We met God for dinner at the Lemon Tree, which was great. The food here is still excellent and God introduced us to spicy deep fried catfish with ginger and garlic… it was really spicy! Afterwards we went over to a pub for a drink before heading back home.

When Covid hit, many places in Chiang Mai were closed and our friend’s bar, Mellomango was one of them. It had definitely been a struggle for many business owners and Chiang Mai was very quiet. The next day we went over to The Siri and we met with Jenn, the manager. She showed us a couple of apartments, told us the basics about additional fees and the area. It was really nice, so we decided to book a month. The room was 50m^2 and had a comfy king size bed, rainfall shower and the best bit, a gorgeous 55” LCD TV. We paid an extra 500THB for high speed internet which worked out great vs. sharing the condo WiFi. There was also a nice gym and pool that we would be able to use. We were to move in the next day which was excellent since there was construction next to us at Pansook.

We had an easy move to the new condo, Jenn couldn’t believe we only had one backpack each. The best part of The Siri was that we were walking distance to everything we could need… coffee, groceries, lunches, malls… it was perfect! We discovered new lunch places, found a Burmese restaurant that had some of the best tea leaf salad we’ve had, explored the local Makros, found a new breakfast spot and could still walk over for our Khao Soi. It was kinda cool when we were recognized as regulars and didn’t have to fill out the order form! We also became regulars at the local BBQ chicken stall for a ½ chicken, somtam and rice. It got to the point when we walked in we were asked if same same. So good! Some nights we would just hang out at the condo and order Grab food from a new Vietnamese place we were told about, the Lebanese place that used to be beside God’s or Wrapmaster. We were spoilt for choice.

We met a couple from Calgary that we had gotten friendly with through the Farang FB group for a meal at Lemon Tree. They were a nice couple, missionaries who have worked in various places but the last 13 years in Northern Thailand. We had a nice evening and it was interesting to hear their stories. We took the opportunity to sample the fried minced cat fish and Hang Ley curry. This is a northern style curry that Ness and God introduced us to and it’s delicious. It’s slowly simmered, has nuts and potatoes in it and was excellent.

During this time, there was another mini lockdown as the cases were increasing. Small House was closed as were most other bars and restaurants that were restricted in serving alcohol. We were still able to spend time with God, Ness and Ian. Unfortunately, Yves hadn’t been able to get over to Thailand yet. We’d meet for dinner or go over to someone’s place in the evening for drinks. It was nice to spend time together. God took us on a tour of his new neighbourhood and we went to the market for a bowl of curry noodles. We met some of God and Ness’s friends when we were invited over for a hot pot dinner. Eventually things settled down and we were able to go see Dao at Small House. There was still a curfew for bars, so we went together to an after hours place… it was fun to have time with Dao away from the bar. We got to see many of the same people we had met last year, met some new ones and had some great times. After one night, we ended up at some bar up by God’s place that had a big LFC sign. We had lots of food and beer with God and Ness, Ian was smart and had headed home! We got to spend an afternoon out at Huay Tueng Thao Lake, including a trip to see the large straw figurines. Then a walk through of the large veggie market by the American Embassy which was awesome. The fruit and veggies were fresh and crazy cheap. 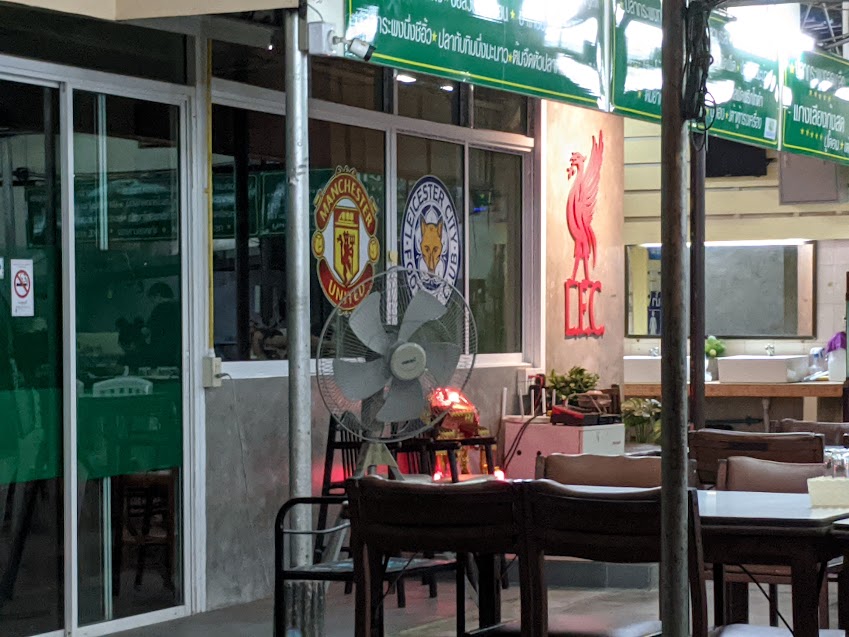 Unfortunately, God’s Mom was really sick and ended up in hospital. We went to visit her but she was already in a coma so we weren’t able to speak to her. We were able to offer support to God and his sisters. She went downhill quickly and passed away within a couple of days. Ness and Ian included us in the sending of flowers and we attended the ceremony for her funeral. This was a 3 day service with the local monks coming to chant, tables and shelter set up for food and drinks with the local ladies cooking, friends and family gathered to remember her. While it was a very sad occasion, you could tell she was very well liked and people enjoyed being together to remember her. We were honored to be included. The final day, God and his nephew became monks for the day to perform the service at the crematorium. We went out with Ness and Ian, spent the day then went to the cremation.

Afterwards, Ness, Paul and I headed off to SriLanna National Park. There was a dam built with house rafts we could spend the night at. God, his sister Klangjai, her son and his friend came out later on. It was a nice experience. We brought beer and ice, ate a lot and hung out on the house raft. Klangjai tried to show me how to make flowers out of the the pandam leaf, but I wasn’t very good. The next day we headed back into Chiang Mai with a stop at the Legendary Sausage vendor. Paul and I ate all of ours before we got home. We also stopped close to God’s village at a really cool farm and coffee shop. 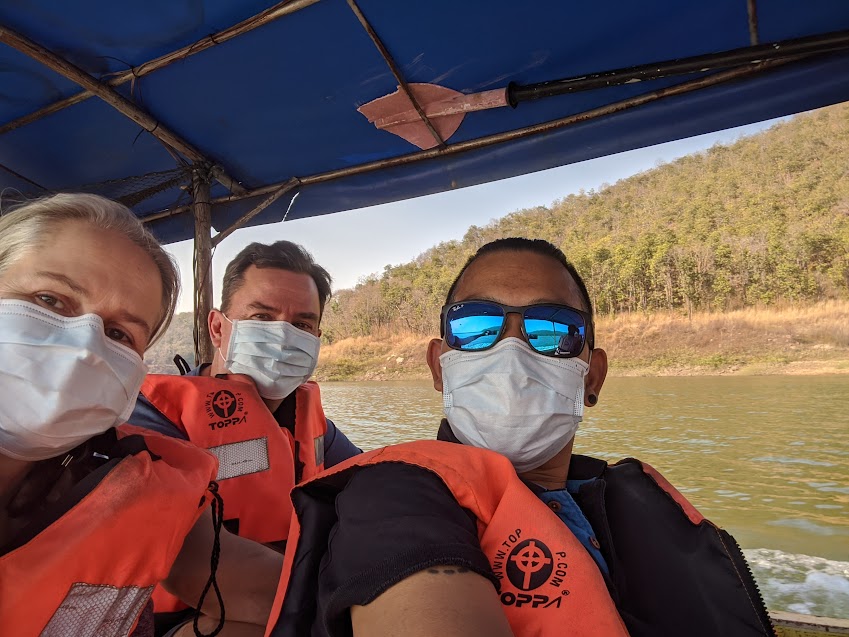 To the Floating house 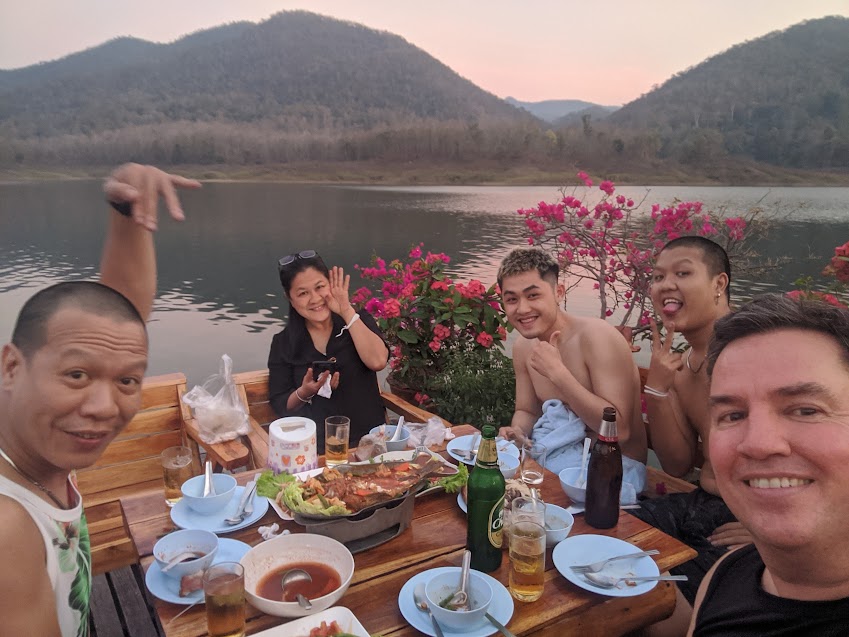 We were on a 60 day tourist visa and getting close to an extension, so Ness took us to immigration to talk to them to see what we needed to do. Turns out we were too early to apply, and we were told to come back later. They did give us all the forms and told us what to bring back so that was helpful, the volunteer we talked to said to come on his birthday. At this point we had extended our stay at The Siri to 2 months. Jenn was awesome and made it really easy. We went back to immigration in the middle of February, the day after the volunteers birthday… he was very happy when we wished him a happy belated birthday, and applied for the 60 day Covid Extension. It was easy, went smoothly except we were given different end dates. We spoke to the officer and they changed Paul’s extension expiry to match mine, we assumed both on the system and on his passport.

A week or two later, Ness invited us all to his cousin’s place out in the mountains, not far from the Elephant Nature Sanctuary. We stopped at a market and stocked up on all sorts of food, then headed to the mountains. It was a lovely night and we had a wonderful time. Ness’s cousin’s place is beautiful. They have a couple of small bungalows on top of one of the mountains. We heard elephants moving around and trumpeting in the night, played song guessing games, came up with a new religion (The Curish) and stayed up till the wee hours. The next day we headed back into Chiang Mai with another legendary sausage stop and we were home. 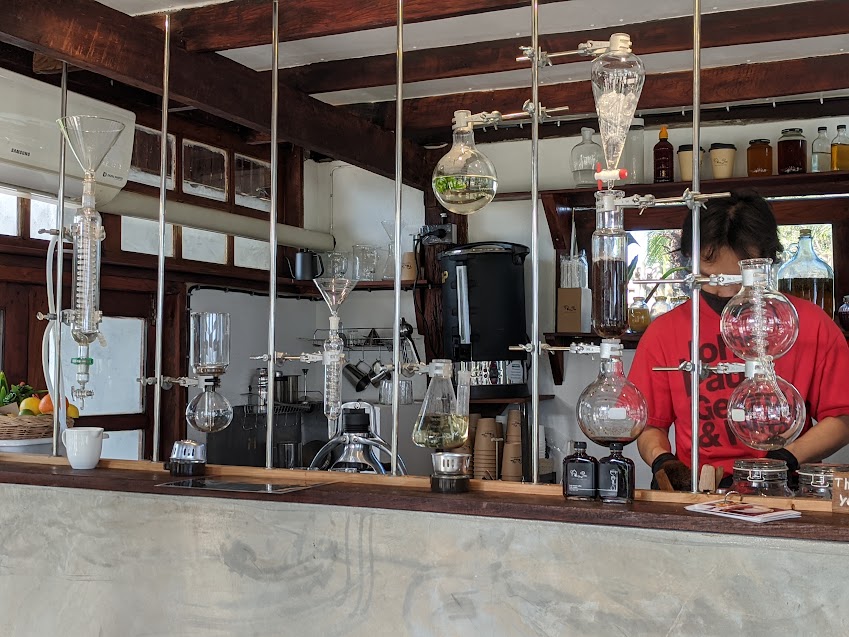 We really enjoyed spending time with God, Ness and Ian. It was nice to spend time together relaxing and enjoying each others company. Yves was set to arrive in Thailand in late February but had to quaratine before making it to Chiang Mai. Dao let us know that Small House, after many years, was moving outside of the area. Years ago they had bought land and built thier house about 20(ish) minutes away. They had enough land to set up Small House bar on the property. In all the years we have been coming to Chiang Mai, this time was extra special and filled with so many memories.

Chiang Mai was awesome but the smokey season had arrived. We even bought an air purifier (Xiaomi 3H Air Purifier) for the condo which made a massive difference. The air got so bad that we decided to head south to Koh Lipe. Covid was still a factor but seemed to be mostly confined to Bangkok. We managed to get flights and were set to arrive at the beginning of March.