March 5th arrived and we headed out bright and early to get our flight to Bangkok. With Covid making another resurgence, flights were restricted and the direct flight from CNX-HDY no longer operated which resulted in a connection in BKK. We hoped to be able to make the trip in one go, so booked a taxi pick up and ferry tickets for that afternoon hoping we could make it work. The flights were on time and our taxi driver was a maniac so we arrived in time to grab some snacks before getting on the boat.

Getting to Lipe was fairly smooth, we did have the stop at Turato and the arch island added to our trip, but that was okay. We were very happy to arrive at The Reef to see Nok and Mikkel. Our room was great, we had upgraded to the balcony room and had a really nice view of Adang and across the island. Things on Lipe had changed a lot, many places had shut down but our favorites were still open. We started at OMG to see Oh and Su, met Tic the new member of the team. We met Pupy, Bingo, Tomas and Romana from Slovakia, Virginia from Spain, Dave and Nathalie, Stephanie from New York, Carl from England, Joey from Fredriction, Pekka from Finland and the usual suspects Jason, Sam, Ruby and various others. It was nice to be back. We did miss seeing all our usual suspects… you know who you are! 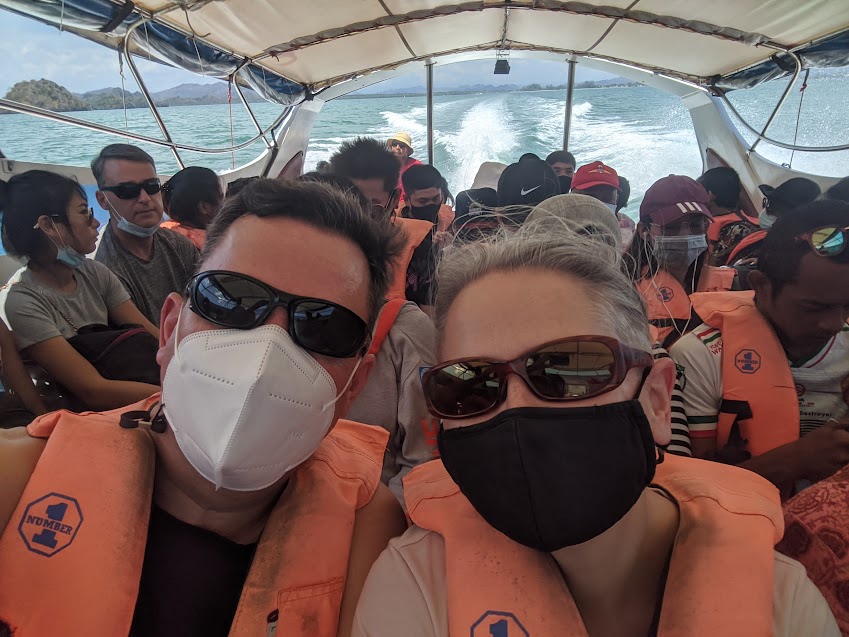 We had a visit with Nee from Nee Papaya, we were greeted with hugs and amazing food. We managed to see Beelan one night as well. Elephant was very quiet but the food was still good so we went a couple of times. The lady we booked our ferry tickets with is the owner of Wapi Resort so they told us to make use of the sun loungers at the front of the resort, which was great. As we got to know people, it turned out that Dave and Nathalie had been renting Chip’s place for the year. They had arrived shortly after we left in 2020 and stayed on the island during lockdown.

Yann decided to come to the island as well. He stayed at the Reef and we were able to spend time hanging out. Yann was on a major lifestyle change so really didn’t drink anymore, he also weighed all his food portions on a small portable scale. We had a good laugh the first time he used it, I thought it was some form of a cross and he was about to pray. We hung out, spent time at the beach and ate a lot! Yann’s friend Oil, who he met on PhiPhi, came to stay for a few weeks as well. She runs a clothing shop in Bangkok and we enjoyed meeting her. 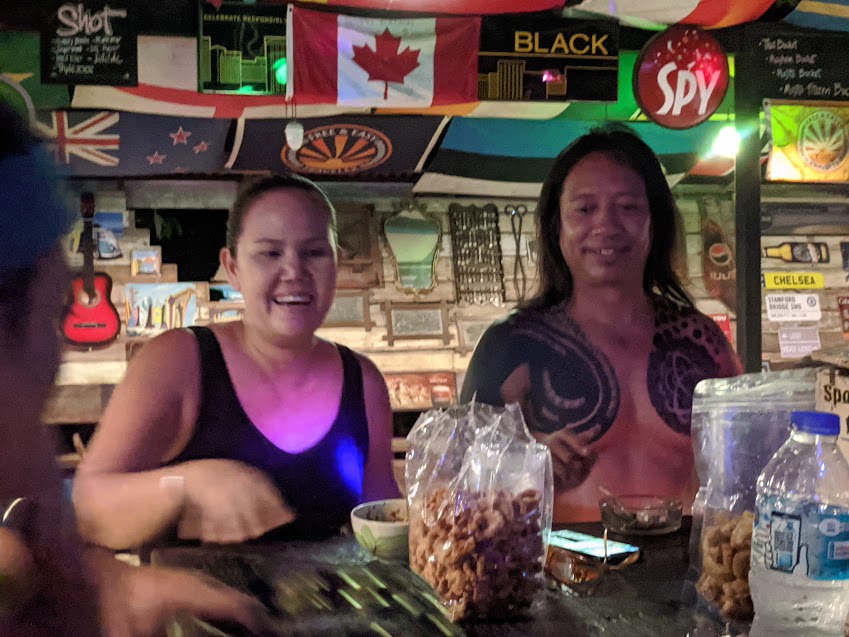 We ate the majority of meals at either Nee Papaya, Bombay India or La Luna, basically a rotation of the 3 and then headed over to OMG or Corner Bar. OMG had live music, Song played guitar and sang, then helped out behind the bar between sets. He was very talented. We got to know Tic, who ended up cutting my hair with kitchen scissors on the front patio at OMG. Bird came to the island a few times so we were able to spend some time together which was nice. P’San and P’Nam were also on the island so we’d stop for a chat at San Pita on the way to the beach.

Had some ATM trauma when the system shut down mid transaction and said it gave me the $$, which it didn’t. I tried to call the number of the bank, but wasn’t able to get through. The lady whose pharmacy the ATM was in, called and got me through to someone but they told me to contact our bank. Went back to our room, contacted our bank and was told to contact the Thai bank, who told me to contact my bank. Eventually I was given some forms to complete and told it would take 45 days to investigate. 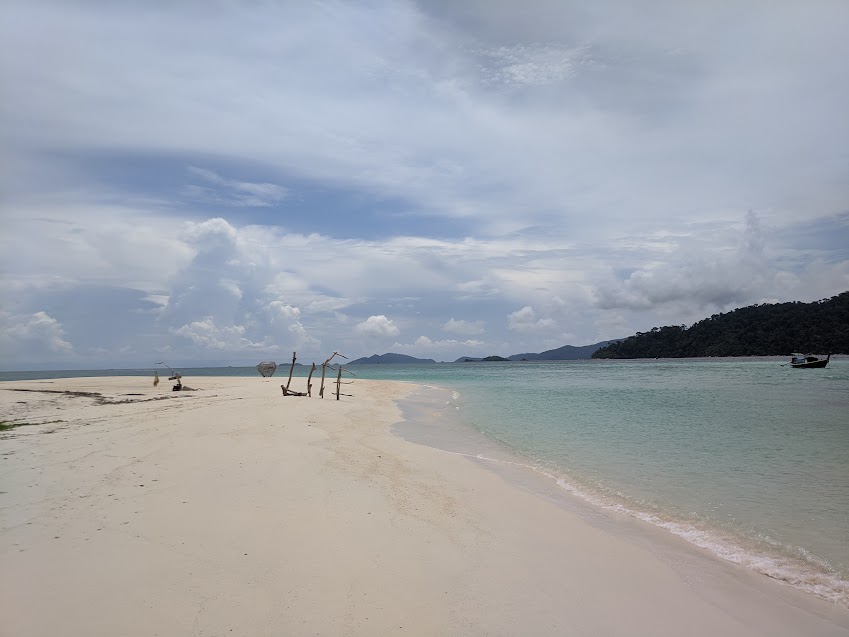 We made the decision to stay longer on Lipe, COVID was getting a foothold on the mainland again and travel wasn’t recommended. We had to go to Satun for another COVID extension visa. When we decided to go, we contacted Nut in hopes that she would be free since we hadn’t been able to see her the last few times. Lucky for us, she was available and we had a wonderful time. We took the boat over with Nok and Mikkel, they had an appointment to get to. It was a really bumpy ride but we made it intact. Then into the taxi to Satun immigration. We arrived and contacted Nut, who came to pick us up. We were spoiled rotten! Nut took us for a really nice lunch, then back to immigration so we could get our extensions. Everything went smoothly and it didn’t take too long… unfortunately they stamped us for the 15 days instead of the full extension, so we would have to head back to the mainland.

Nut picked us up, drove us to run some errands and then took us to a hot spring near the Malaysian border. After a good soak, we headed back into town. Nut took us to the main bank branch for the atm we had issue with and had the branch manager call in. It was great that they tried to help, but in the end nothing changed. We then stopped for a coffee, some amazing soup and headed to Pak Bara for the night. It was really nice to spend time with Nut again, we miss seeing her. 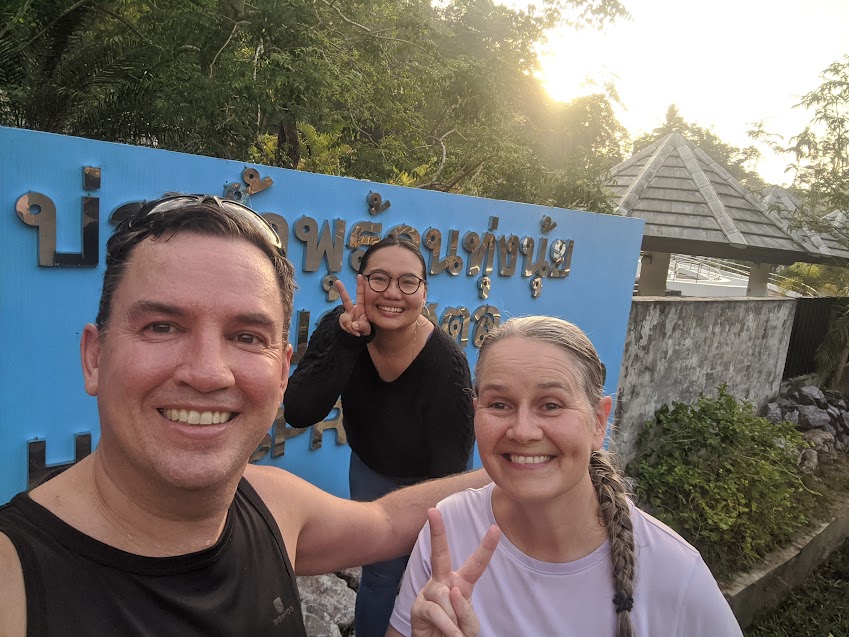 Honestly not sure what to call this! 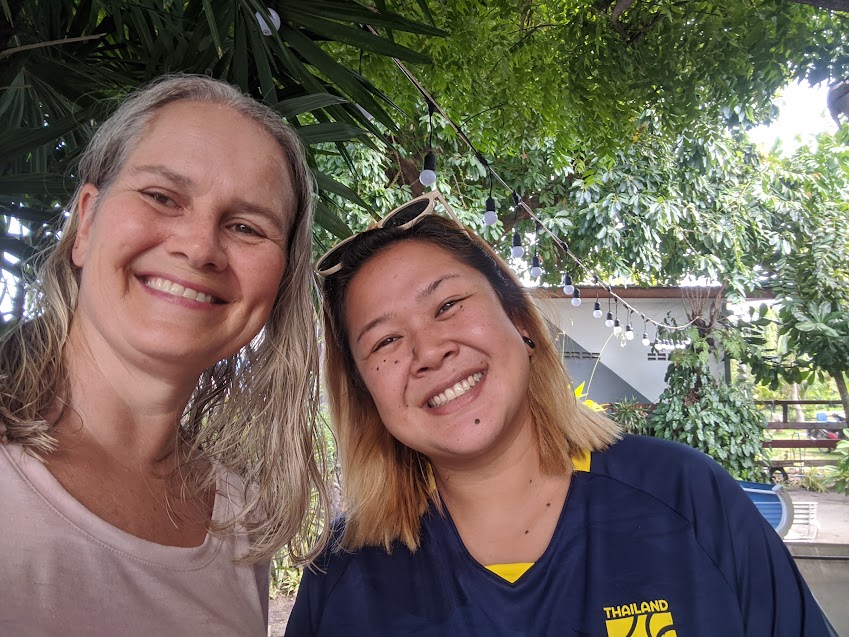 One thing that I must mention here… this time in Thailand, I tried a lot more different types of foods. The Northern Laarb has organ meats interspersed with ground meat, Paul wasn’t a huge fan. I ate a lot of liver, tried pig’s intestines, some beef tripe, chicken feet and fried chicken elbows. One of our favorite meals was yellow dahl Tadaka and Tandori chicken… so good!

With our decision to stay, we moved around a lot at the Reef, especially during Songkhran as that’s when the island got back to normal for hotels and everything was booked. Nok and Mikkel were great, moving us around and getting us back into the balcony rooms when possible. We really enjoyed the downtimes with Nok and Mikkel, sitting together during breakfast when we were the only people there and getting spoiled with “street art” lattes. We were even able to go for dinner, drinks a few times and shared a family hot pot in the kitchen one night. It was a very special time and we were planning to extend our time in Thailand again. We thought we’d spend some more time on the island before heading back to Chiang Mai. Yves was able to get back from Belgium so it would be nice to spend time with him, God, Ian and Ness before we headed back. In the beginning of May we received a call from Canada asking us if we could come back. A situation had arisen and we were needed in Creston. I won’t get into the why here, it’s a very personal situation that should not be shared. We discussed it and started looking into flights back to Creston. Our previous return flights had been cancelled some time prior, so we didn’t have anything booked. We managed to arrange flights, covid tests and quarantine within 7 days so arranged to head back for May 9. It was sad to leave, even with the issues going on, this was a really special time on Lipe and we don’t know if we will ever experience it again.