Kampot again you say… well yes, there are a few places that we have been that keep us coming back and Kampot would be one of those places. Of course, being able to see our friends like Lee, Dean, Dhieu and the kids, Paula and Sydney. Hang out at our favorite places like the NYNY with Tavi, Stumble Inn with Harry and Keemi, Aroma House with James or Couch Potatoes with Jem. There are constant changes but it always feels good to be back.

Our transfer from Ha Tien to Kampot was smooth and we didn’t have any hiccups. At this point we had already started hearing about a flu that’s going around in China. Apparently it was quite bad and people were starting to get concerned. For the first time entering Cambodia we had our temperatures checked and were given a piece of paper that we had to keep with us. 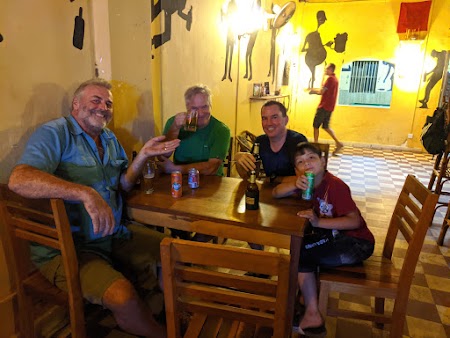 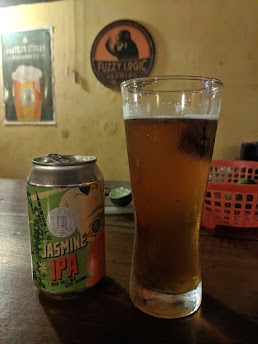 In Kampot, there were actually less tourists than usual since many Chinese people were already staying home. We had a nice night with Lee at Stumble Inn, Dean and Will were even there for a bit. We spent the new few days trying places we hadn’t been before like Papa’s and Rusty 2 and hitting up old favorites like Aroma House and Cafe Espresso. Rusty 2 ended up being where we probably spent the most time. They had an awesome breakfast, cheap beers and excellent pizza that even I could eat as it was made with rice flour. The best part was getting to know SreyMom, she was great. After our second breakfast she knew what we wanted, was really friendly and helpful. Paul was feeling a little run down so I walked over one night for pizza’s and we had a great conversation while waiting. SreyMom showed me her embroidery and some of her art. I wish I had more photos!

We went to Espresso for coffee, it’s always good. Got the nod from Neil so our welcome was complete. We didn’t get to see Mike this time, even though his restaurant had moved closer we weren’t around it too much. Paula and her friend came down from Phnom Penh for a day or two, on their way to Kep. We had a great night out at RikkiTikkiTakki, another bar for fancy drinks and ended at Stumble Inn… as usual. 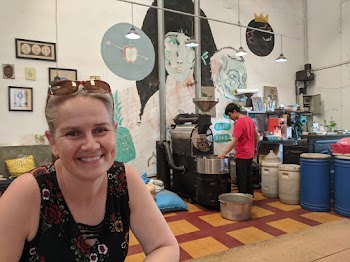 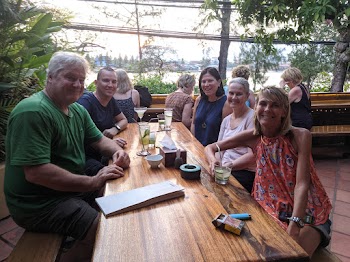 Dean had closed Razorbacks, they were focused on building some guest houses out on their property. We took a tuk tuk out a few times to see Lee and his latest projects. He had set up solar and built a telescope. We even spent several hours on VR. We were able to spend some time with Dhui when we went over to see the guesthouses and pool. She is always so busy it’s rare to be able to visit with her. The kids love the pool and Will performed all sorts of tricks.

We got to spend more time with Lee and just hung out at his place or at Rusty’s for pizza and beer. We went for Mexican food one night with everyone. Spent time visiting with James at Aroma, he was telling us about his new spot that he might open. We spent several hours just sitting around and visiting with him as well. It was a pretty chill time and we enjoyed it.

There was more talk about this virus spreading and being dangerous, China basically went into shut down mode. Wuhan was closed, other countries were banning tourists from China, the WHO was getting concerned and we were scheduled to fly from Sihanoukville, Cambodia’s China Central to Malaysia. We were able to get sanitizer but no masks before we left. We arranged a taxi to the airport and had our first visit there. We didn’t see much of the town but what we did see made us glad we hadn’t gone there before. Luckily we just had to hang out at the airport for an hour(ish) before heading off to Malaysia. 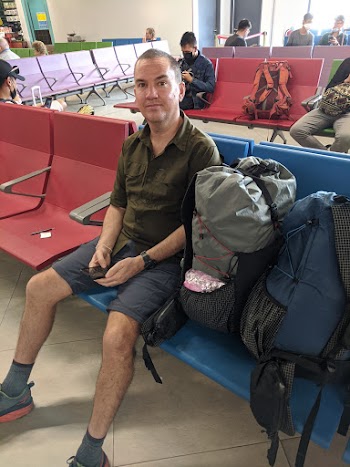